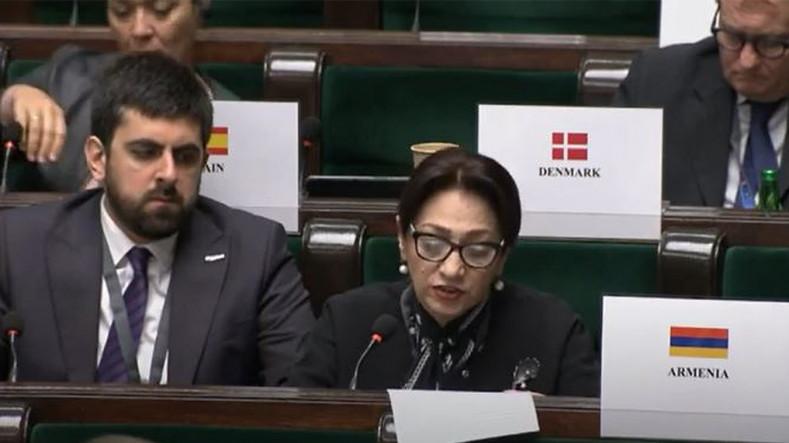 Opposition Hayastan bloc MP Lilit Galstyan, a member of Armenia’s delegation to the Organization for Security and Co-operation in Europe (OSCE), addressed the 20th autumn meeting of the OSCE Parliamentary Assembly on Friday. Her full statement is provided below.

Today, rightfully, the main concern of the International community is Ukraine.

But, sadly, human rights, aggression and war, regardless of nationality and geography, have the same face and the same consequences.

Not so far from the European capitals, the people of Armenia and Nagorno-Karabakh,  are continuing to be subjected to aggression, displacement and ethnic cleansing.

After the November 9 statement, Azerbaijan continues its  genocidal behavior. Contrary to the provisions of the treaty, Azerbaijan did not release all  prisoners of war. During the so-called peaceful period, the number of victims among the civilian population exceeds 180. The militant rhetoric of the Azerbaijani officials,  vandalism and destruction of the Armenian cultural heritage of Nagorno-Karabakh  are of a continuous nature. The return of thousands of displaced people to their homes is not implemented.

Dear colleagues, we must go one  step further.

If the international community,  is really interested in long-term peace in our region, then Azerbaijan must be held accountable as a war criminal for violations of international law,  for the use of chemical weapons, for policy of ethnic cleansing and the involvement of Turkish backed terrorists.

I refuse to believe that the EU-Azerbaijan gas deal holds more worth than real European values.

The conflict is not resolved. The right of the people of  Kharabagh to self-determination has no alternative and cannot be considered resolved through aggression.