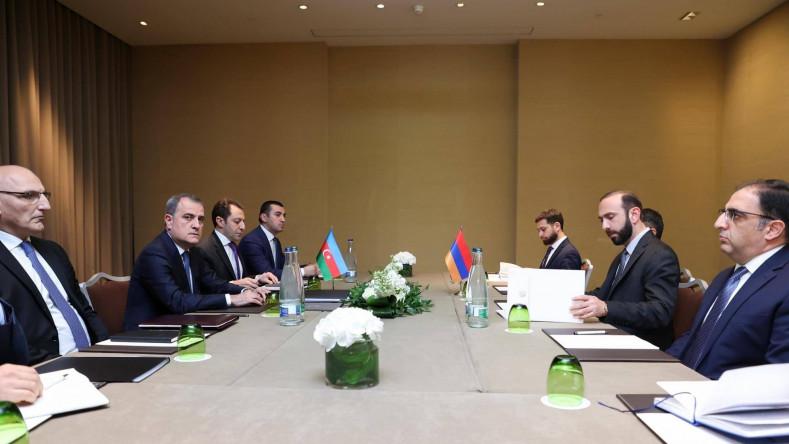 The meeting was held in line with the agreement reached at the trilateral meeting of the leaders of Azerbaijan and Armenia with the participation of the head of the European Council on August 31 in Brussels. The Foreign Ministers were instructed to prepare a text of the peace agreement.

"Minister Jeyhun Bayramov stressed that in the post-conflict period it is important to focus efforts on the settlement of interstate relations between Azerbaijan and Armenia and the signing of a peace treaty. In this regard, the Minister brought to the attention of the Armenian side in detail the elements of the agreement, based on the five basic principles we proposed.

During the meeting, Azerbaijan proposed to hold a next meeting of the bilateral delimitation commission in October, and not in November of this year, as previously agreed, with due regard for tensions on the delimited border," the message reads.

Bayramov called on the leaders of Azerbaijan, Armenia and Russia to ensure the complete withdrawal of the Armenian armed forces from the territory of Azerbaijan, to open transport and other communications in a short time on the basis of the agreements reached within the framework of the trilateral commission under the leadership of the deputy Prime Ministers, to make progress in the work on the delimitation of the border.

Touching upon humanitarian issues, the Minister emphasized the importance of clarifying the fate of nearly 4,000 missing Azerbaijanis, the inadmissibility of the continuation of the installation of mines by the Armenian side on the territory of Azerbaijan, which entailed numerous tragic losses, which is a gross violation of Armenia's commitment to the trilateral declaration, and is a war crime.

Minister Jeyhun Bayramov once again stated that Azerbaijan is committed to ensuring peace and stability in the region and is ready to sign a peace treaty. It was agreed to continue discussions in this direction, the message says.