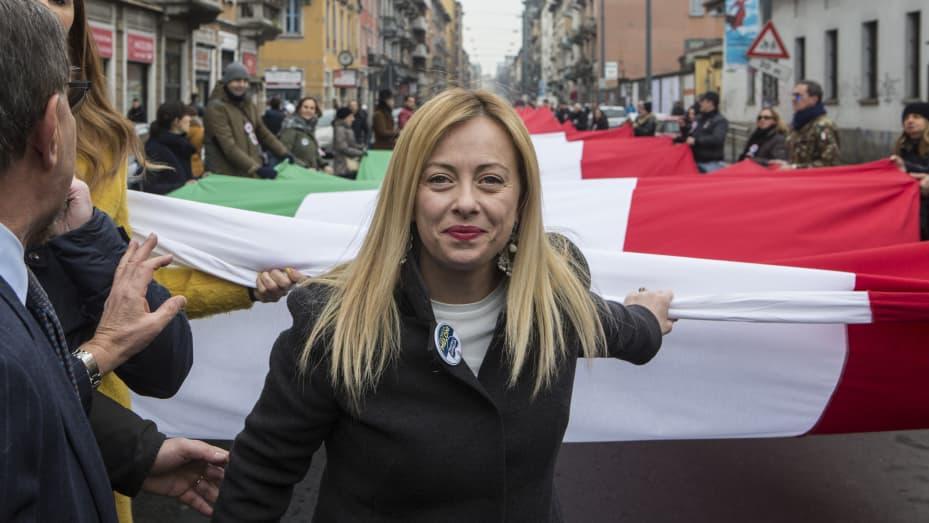 Italians vote on Sunday for the first time in almost five years in national elections that will usher in a new, and polls predict, right-wing government that will face economic challenges, a deepening energy crisis, and questions about Italy’s line against Russia, The New York Times writes.

The elections come after the national unity government of Prime Minister Mario Draghi, a darling of the European establishment who is widely credited with increasing Italy’s credibility and influence, collapsed amid a revolt in his coalition. The elections had been scheduled for February, but the premature collapse raised familiar questions about Italy’s stability and the popularity of the country’s far-right opposition, which had grown outside the unity government, and rekindled doubts about Italy’s commitment to the European Union. International markets, wary of the country’s enormous debt, are already jittery. And Italy’s support for sending arms to Ukraine, which has been influential within Europe, has emerged as a campaign issue, raising the prospect of a possible change of course that could alter the balance of power in Europe.

Despite the broad popularity of Mr. Draghi, a Eurocentric moderate, it is the populist-infused right, with a recent history of belligerence toward Europe, that has had a clear edge in the polls. Most popular of all has been the hard-right Brothers of Italy party, led by Giorgia Meloni, whose support skyrocketed as it was the only major party to remain in the opposition. If she does as well as expected, she is poised to be Italy’s first female prime minister. Ms. Meloni is aligned with the anti-immigrant and hard-right League party, led by Matteo Salvini, and Forza Italia, the center-right party founded and still led by the former prime minister Silvio Berlusconi.

Italy’s election law favors parties that run in a coalition, and so the coalition on the right has an advantage over the fragmented left. The largest party on the left, the Democratic Party, is polling around 22 percent. But Ms. Meloni’s support has polled around 25 percent, and the right is expected to gain many more seats in Parliament, the basis upon which the government is composed.

The once anti-establishment Five Star Movement cratered from its strong showing in 2018, when it had more than 30 percent of the vote. But after participating in three different governments spanning the political spectrum, it has lost its identity. Now headed by the former prime minister Giuseppe Conte, it has opted to run alone. In recent weeks, its poll numbers have climbed up, thanks to support in the south, which is rewarding the party for passing, and now defending, a broad unemployment benefit.

A centrist party called Azione, led by a former minister, Carlo Calenda, and backed by another former prime minister, Matteo Renzi, would claim a moral victory even if it only hit 6 or 7 percent.

What are the issues?

The issues of the day are energy prices, inflation, the cost of living and Italy’s policy toward Russia and Ukraine.

On the last issue, the conservative coalition is split. Ms. Meloni, in part to reassure an international audience that she is a credible and acceptable option, has been a consistent and outspoken supporter of Ukraine. Even though she has been in the opposition, where she criticized coronavirus vaccine mandates, she has emerged as a key ally of Mr. Draghi on the question of arming Ukraine.

Her coalition partners are less solid on the issue. Mr. Salvini, who has a long history of admiration for President Vladimir V. Putin of Russia, even wearing shirts with the Russian’s face on them, has argued that the sanctions against Russia should be reconsidered.

Mr. Berlusconi was once Mr. Putin’s best friend among leaders of Western Europe.

The conservative coalition has proposed cutting taxes on essential goods and energy, offering energy vouchers to workers, and renegotiating Italy’s European Union recovery funds to adjust for higher prices. It is also seeking to reinvest in nuclear energy, which Italy has not produced since the 1990s and banned in a 2011 referendum.

Its leaders have proposed a deep flat tax and the elimination of unemployment benefits popular in the south — known here as the “citizens’ income.” The benefit, pushed through with much fanfare by the Five Star Movement in its first government, acts as a subsidy to the lowest-income earners.

To drum up electoral support, hard-right parties have also tried to make illegal migration an issue, even though numbers are far below earlier years. They are also running to defend traditional parties from what Ms. Meloni has called gay “lobbies.”

The right also wants to change the Constitution so that the president can be elected directly by voters — and not by Parliament, as is now the case.

The center-left Democratic Party has argued to continue the hard line against Russia and has emphasized energy policies that focus on renewable sources, cutting costs for low and medium-income families, and installing regasification plants to increase natural gas supplies as Italy faces shortages from Russia. The party has advocated easing the path to citizenship for children of immigrants born in Italy, and wants to increase penalties for discrimination against L.G.B.T.Q. people. It also proposes introducing a minimum wage, cutting income taxes to raise net salaries, and paying teachers and health care workers better wages.

What happens after the vote?

Exit polls should come out the night of the vote, but since voting places close at 11 p.m., no official results are expected to be declared until the next day, or even later. But even once the results are known, Italy will not have a new prime minister for weeks. The new members of Parliament will be confirmed and convened in Rome in the middle of October. They will then elect the speaker of the Senate and of the Lower House, and party leaders for each house.

The president, Sergio Mattarella, will then begin consultations with the speakers of both houses and the parties’ representatives. The coalition that won the most votes will designate their candidate for premiership. If their candidate is able to win a majority in the newly elected Parliament, the president will appoint a potential prime minister to form a new government. Should Brothers of Italy win the most votes, as is expected, it would be difficult for its coalition parties to justify a prime minister other than Ms. Meloni.