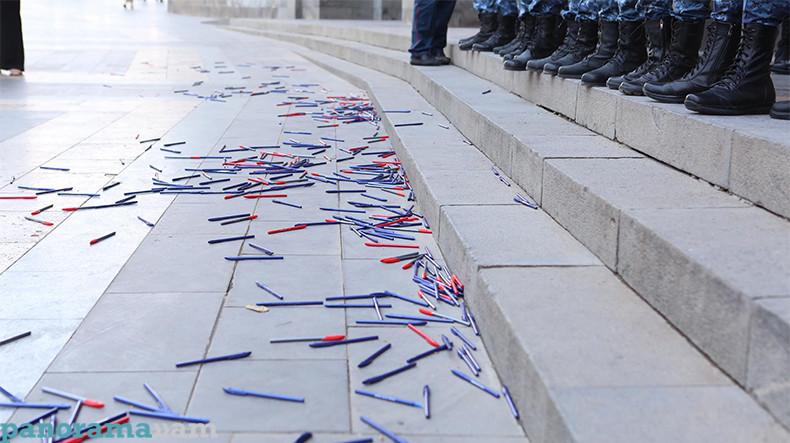 Two women brought scores of pens and threw them near the Armenian government building in central Yerevan amid a meeting chaired by Nikol Pashinyan on Thursday.

"We brought them to Pashinyan so that he wouldn't steal other people's pens,” one of the women said, referring to the video footage which shows the premier taking a pen from the table and putting it in his pocket at the 31st sitting of the Board of Trustees of the Hayastan All-Armenian Fund held in Yerevan on Saturday.

The woman said she had seen the footage on Russian TV channels.

‘We decided to bring him pens that are enough for a year and say ‘Nikol Pashinyan, shame on you!'" she said.

Also, the woman says the move is symbolic, since Pashinyan uses pens only “to sign documents on territorial concessions” to Azerbaijan.

"He ceded Berdzor with a single stroke of pen, he is going to surrender Tigranashen as well. The pens are also used for making prisoners traitors," the woman said.

The move angered some people, who gathered outside the government building to voice their concerns.

A woman living in an emergency house asked who the “sponsor” of the action was.

"I paid for them out of my own pocket, one pen costs 30 drams. I am fighting for my homeland. I don’t understand those who demand housing. What do they need a house for if the Turks reach Yerevan?" the woman replied.