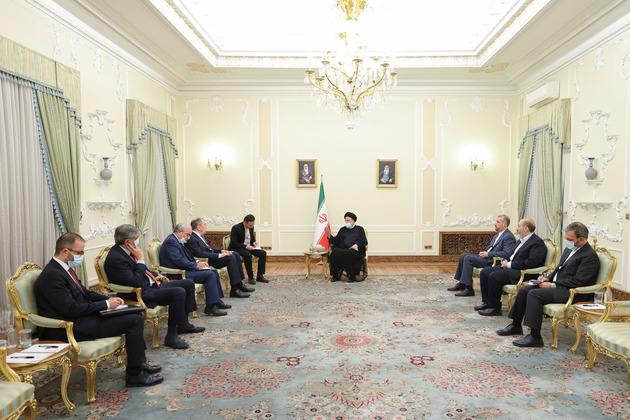 Russian Foreign Minister Sergey Lavrov is holding a meeting with his Iranian counterpart Hossein Amirabdollahian during a two-day visit to Tehran.

The parties are expected to focus on the prospects for restoring the Joint Comprehensive Plan of Action (JCPOA) on Iran’s nuclear program and the Ukrainian issue, also discussing the situation in Syria, Afghanistan, the South Caucasus, the Persian Gulf and the Caspian Sea area.

In addition, the Russian and Iranian top diplomats will pay attention to bilateral issues, particularly the implementation of joint energy, transport, cultural and humanitarian projects.

Moscow and Tehran have repeatedly emphasized their determination to boost cooperation in all areas despite tremendous Western pressure. Iranian Ambassador to Russia Kazem Jalali said at the St. Petersburg International Economic Forum that Iran viewed Russia as a priority in terms of bilateral relations.

"We intend to continue expanding mutually beneficial ties with Iran for the sake of regional stability and global security. We see good prospects for strengthening the current positive trends in all areas of cooperation between Russia and Iran," the Russian Foreign Ministry said in a statement ahead of Lavrov’s trip to Tehran.

Iranian President Ebrahim Raisi said at the meeting with Lavrov that continuous talks and meetings between Iranian and Russian officials indicate the two sides’ serious determination to form a new era for fruitful strategic cooperation.

After Lavrov’s report on the latest situation of bilateral economic cooperation, Raisi said that strengthening of cooperation is an effective way to fight the U.S. sanctions and economic unilateralism against independent countries.

Turning to the issue of the situation in Ukraine, the president said the Islamic Republic of Iran is ready to help find a diplomatic solution for this conflict and stressed the importance of putting an end to it.

As the president underlined, provocative measures of the United States and the North Atlantic Treaty Organization (NATO) have caused conflicts [in Ukraine].

Stressing the importance of cooperation among countries neighboring the Caspian Sea, the president said any military presence of foreigners should be banned in this region.

For his part, Lavrov expressed his country’s readiness for upgrading the level of cooperation with Iran. He also said Russia supports Iran’s role in the international and regional bodies.