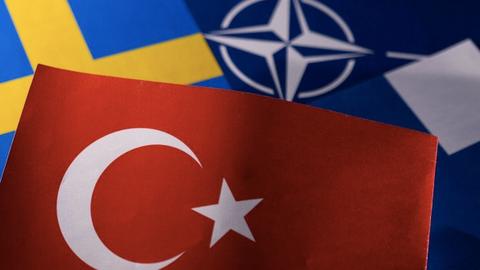 The assurances Ankara expects from Stockholm would include the termination of political support to terrorism, eliminating the source of terrorism financing, cessation of arms support for the PKK terrorist group and its Syrian wings YPG/PYD, as well as the lifting of embargoes and sanctions against Ankara.

"Since 2017, our country has requested the extradition of PKK/PYD and FETÖ terrorists from Sweden but has yet to receive a positive response," it said, adding that the Swedish authorities support terrorist groups' activities within the country and receive terrorism affiliates that Ankara has been fighting at the ministerial level.

The Swedish administration pledged to provide $376 million "in support to the PKK/PYD," which is a terrorist organization designated by 38 countries, including NATO and European Union members, and targets "the national security of alliance member Turkey," the statement said.

As for the arms support for the terrorist group, the directorate said that the Swedish government provides military equipment, especially anti-tanks and drones, to the YPG/PKK and that such weapons were used to target the civilian population in Turkey.

The embargoes and sanctions imposed by Sweden on Turkey were also highlighted in the statement, which called them "unacceptable," given Ankara's "legitimate efforts to defend international rights in the Eastern Mediterranean and secure its borders with Syria."

Although Turkey adopts the "open-door" policy of the alliance, it believes that "the alliance members and candidate countries should cooperate at a high level" in fighting terrorism, just like they do in other fields, according to the statement.

Earlier on Monday, President Erdoğan criticized NATO allies for turning a blind eye to Turkey's security concerns, stressing that diplomatic statements do not contribute to a solution and calling for concrete action.

Last week, Sweden and Finland formally applied to join NATO. But Turkey, a longstanding member of the alliance, has voiced objections to the membership bids, criticizing the countries for tolerating and even supporting terrorist groups.