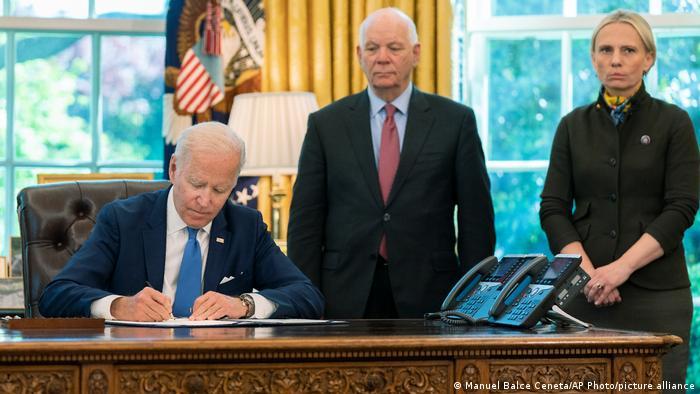 The latest round of emergency Ukraine funding is on its way to President Biden's desk, who is currently traveling in South Korea. The bill most likely has to be flown to Korea for the President’s signature "to avoid any delay", TURAN's correspondent was informed by administration officials.

"Together with the contributions of our Allies and partners, we will keep security, economic, food, and humanitarian assistance flowing to Ukraine, across the region, and around the world, and further strengthen Ukraine — both on the battlefield and at the negotiating table," Biden said in a statement following Senate's passage of Ukraine supplemental.

"The United States is committed to helping Ukraine continue to meet its defense needs and build its future capabilities, as well as to bolster Allies and partners across NATO’s Eastern Flank and the broader region" Secretary of State Antony Blinken said in a statement.

Early on Thursday, Biden lauded Sweden and Finland's applications to join NATO as he hosted their leaders at the White House, describing them as "two proud, independent countries exercising the sovereign right all states possess to secure their own security."

"They meet every NATO requirement and then some," Biden told reporters at the Rose Garden with the two leaders at his side, offering the "full, total, complete backing of the U.S. "

Speaking alongside President Biden, the leaders of Sweden and Finland assured that they’d work with Turkey to address its concerns.

"We take terrorism seriously.  We condemn terrorism in all its forms, and we are actively engaged in combating it. We are open to discussing all the concerns Turkey may have concerning our membership in an open and constructive manner," Niinisto added.

"And we are right now having a dialogue with all NATO member countries, including Turkey, on different levels to sort out any issues at hand" she added.