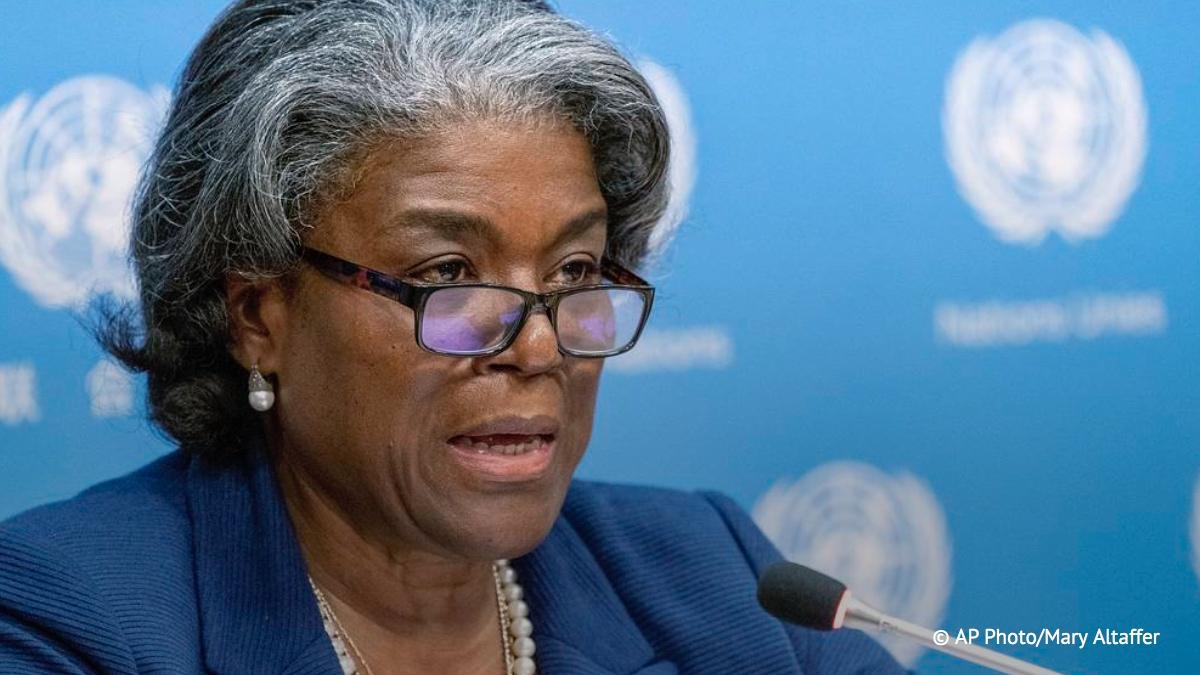 "What Russia has done is attack the core values of the UN charter. They are attacking the independence of a sovereign country. They’re attacking that country’s sovereignty. They’re trying to change that country’s borders. And that impacts all of us." Ambassador Linda Thomas-Greenfield, the U.S. Representative to the UN, said in response to TURAN's questions during a briefing organized by the State Department's New York Foreign Press Center.

"And so it is important that every country makes sure that Russia hears their condemnation and hears their concern. And that goes for your country as well as others" she told TURAN's Washington correspondent when asked about countries such as Azerbaijan, which don’t see the consequences of the Russian-Ukraine war immediately applying to them.

In particular, Amb Thomas-Greenfield talked about challenges of food insecurity, and to get Ukrainian grain back into the international marketplace amid the war.

"The hard truth we have to reckon with is that people starve every day all around the world even though we have more than enough food to GO around. Worse, many go hungry and don’t know where their next meal will come from because warmongers are intentionally using starvation as a weapon of war," she said, adding that, Ethiopia, South Sudan, Syria, Somalia, and Yemen are "just a few examples" of places where conflict is driving people to desperate hunger.

"These Days of Action are about bringing this crisis to the center of the world’s attention, and this all takes on heightened significance given Russia’s brutal and unprovoked war in Ukraine" she added.

Ukraine used to be a breadbasket for the developing world, but ever since Russia started blocking crucial ports and destroying civilian infrastructure and grain silos, hunger situations in Africa and the Middle East are getting even more dire, according to the U.S diplomat.

"This is a crisis for the whole world, and so it belongs to the UN. We have a responsibility to the millions who are worried about where they’ll find their next meal or how they’ll feed their families. This week is about owning that responsibility and taking action to alleviate food insecurity around the globe. And our hope is that this week sparked sustained focus and momentum" she added.

The Ambassador also said there were ongoing talks with Russia to reopen critical food pathways in Ukraine.

“There are discussions ongoing at this moment to see how those corridors can be unblocked,” she said, adding that U.N. Secretary-General António Guterres raised the issue with Russian officials. “I can say that the situation is urgent and that we need to address it now. Because we’re already seeing the impact,” she added.

On Wednesday, U.S. Secretary of State Antony Blinken will go to New York to chair a global food security call to action ministerial meeting which will bring together officials from dozens of countries to review their urgent humanitarian and development needs to address global food security, nutrition, and resilience.

"This will include countries with diverse perspectives ranging from major food providers to those facing significant food crises," the Ambassador said.