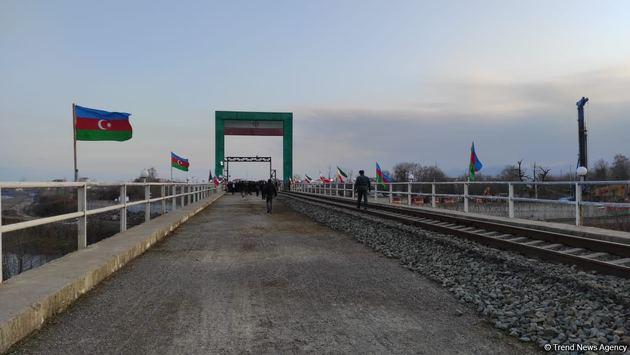 Minister of Roads and Urban Development of the Islamic Republic of Iran, co-chairman of the Azerbaijan-Iran Intergovernmental Joint Economic Cooperation Commission Rostam Ghasemi completed his visit to Azerbaijan yesterday.

He said that the liberation of Azerbaijani territories from  Armenian occupation created opportunities for expanding trade and economic relations with Iran. Mustafayev added that Karabakh will soon become the most beautiful region of Azerbaijan. "Azerbaijan has started to restore the liberated territories as soon as possible. The work is underway to restore the territories, build roads and railways, as well as the Zangazur corridor," the minister said.

Ghasemi  expressed confidence that the cooperation between Azerbaijan and Iran will develop incrementally. "We have witnessed the work carried out by Azerbaijan on the liberated territories. We saw that the work is progressing rapidly. Today's visit has created the basis for signing relevant documents for cooperation in the future. The transit potential that exists between our countries is an additional link in cooperation. The road bridge that will be built in Astara will expand our transit potential," he noted.

“I believe that the opening of new industrial zones and parks, the expansion of trade potential will be reflected in the document to be signed between the parties. Our relations will develop taking into account the interests of both countries. The issue of simplifying the border crossing between our countries is also being considered. We have good potential for developing cooperation in the field of transport,” Ghasemi said.
Mustafayev added that the branch of the Iranian Tractor Manufacturing Plant based in Tabriz city may become a resident of the Araz Valley Economic Zone industrial park in Azerbaijan.

He added that bilateral cooperation in the transport field opens up new opportunities for Azerbaijan. "We have launched a new format of cooperation in the new geopolitical realities created after the Azerbaijani territories' liberation. The Azerbaijani government, despite that our territories were completely destroyed, is pursuing a policy of peace and development of relations with all neighbours," he said.

"I am sure that Iranian companies will start active work on the liberated lands in the near future," Azerbaijani President Ilham Aliyev said during a videoconference meeting with a delegation led by Ghasemi on January 25.

Ghasemi noted that Iran, within the framework of cooperation with Azerbaijan, will contribute to the reconstruction of the country's liberated territories. "I am confident that relations between the people of our countries will continue to develop. Iran is interested in strengthening ties with neighboring countries, in particular with friendly Azerbaijan," he said.

In this context, Mustafayev also stated that Iranian companies are planning to be involved in the restoration of Azerbaijani liberated lands.

Mustafayev and Ghasemi laid the foundation of the bridge across the Astarachay River on the same day. Representatives of the Azerbaijani and Iranian delegations attended the ceremony.

Mustafayev said the construction of a new bridge between Iran and Azerbaijan over the Astarachay River will contribute to the freight traffic growth. "The absence of a bridge between Astara (Iran) and Astara (Azerbaijan) leads to large queues. The new bridge construction will help solve queue problems at the site. Furthermore, this will promote the growth of cargo transportation," he said, adding that it is scheduled to put both the border terminal and the road bridge into operation during this year.