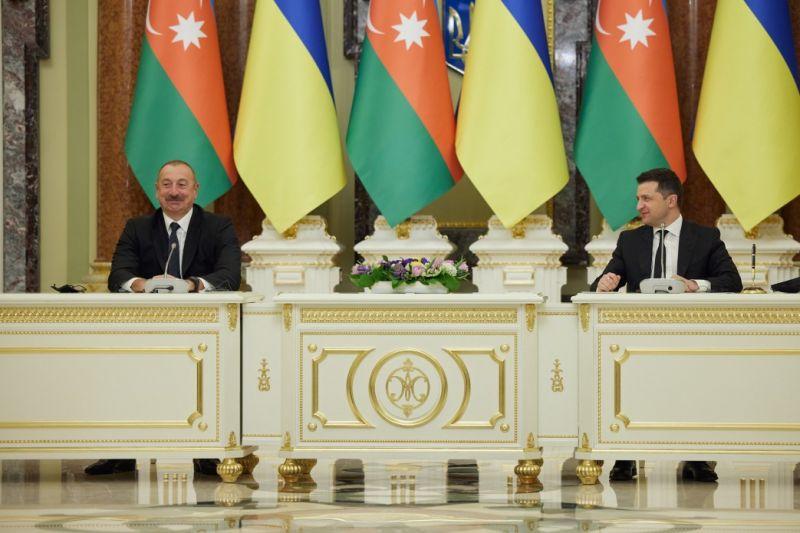 The visit of Azerbaijani President Ilham Aliyev to Ukraine qualitatively enriches the strategic partnership between the two countries in the political, economic and security spheres. This was stated by President Vladimir Zelenski at a briefing on January 14 on the results of talks with his Azerbaijani counterpart in Kiev.

"We discussed in detail all spheres of the existing cooperation and all potentialities of its strengthening. The meeting resulted in signing six bilateral documents on cooperation in agriculture, energy and trade. Their implementation will facilitate investment activity, strengthen food and energy security and enhance the volume of bilateral trade. We have a lot of plans which we discussed in details", - said the President of Ukraine.

He noted that, despite the pandemic, trade turnover between the two countries not only has not fallen, but for the first time in the last seven years has reached a record - almost $ 1 billion. It was the first time in the past seven years that it had reached a record high indices of nearly $1 billion. However, as Vladimir Zelenski noted, this is not the limit, and today the states have set a new ambitious goal - to double the volume of bilateral trade by 2024.

"We are also seeking to raise the size of mutual investments and the number of common large-scale projects. This is, in particular, the participation of Azerbaijani companies in the program "Great Construction", as well as the participation of Ukrainian companies in infrastructure projects, in which Mr. President invited Ukrainian business, "- added Vladimir Zelensky.

The participation of Azerbaijani business in a large privatization in Ukraine was discussed separately. According to the head of the Ukrainian State, this opens up prospects for new mutually beneficial projects.

In this context, Vladimir Zelensky and Ilham Aliyev agreed to hold a meeting of the Joint Intergovernmental Commission on Economic Cooperation in the first half of this year.

"The next step is to organize a meeting of the Council of the Presidents of Ukraine and Azerbaijan," said the head of the Ukrainian state.

The President of Ukraine called the development of transit potential and creation of the relevant infrastructure another urgent goal.

"We must intensify cooperation in international road and rail transport, as well as in aviation. We will continue to work together on a number of prospects, including the creation of a transport corridor within GUAM, uniting Ukraine, Azerbaijan, Georgia and Moldova," he said, adding that cooperation questions were also raised in other important sectors.

"I'm sure that the agreements we have reached today start a new stage of our strategic, historical, very correct substantive cooperation," Zelenski concluded.

Besides, they discussed food security through the creation of joint enterprises in the food industry and joint innovation activities.

"We are ready for cooperation in all spheres," Ilham Aliyev said in conclusion.