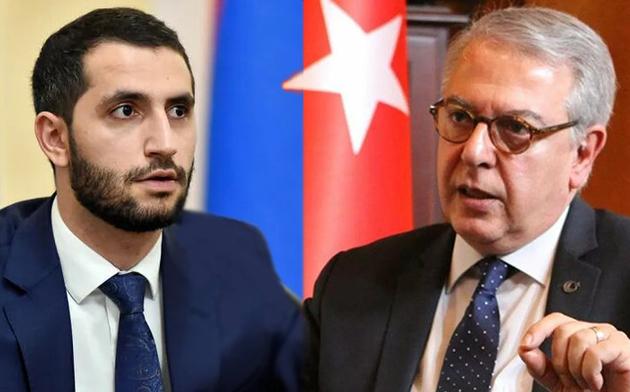 On January 14, the first meeting of representatives of Armenian and Turkish diplomacy in many years was held in the Russian capital. The readiness of Armenia and Turkey to work on the normalization of their relations was welcomed in Moscow, Brussels, and Baku.

The meeting between the special representatives of Armenia and Turkey, Ruben Rubinyan and Serdar Kılıç, on the issues of normalization of bilateral relations was preceded by diplomatic preparations, which were actively promoted by Russian diplomacy. As a result of the one and a half hour meeting, the foreign ministries of the three countries published brief conclusions.

Although the Armenian Foreign Ministry expects to gradually establish diplomatic relations between the two countries without any preconditions, the mood of the Armenian side on the eve of the meeting was emphatically skeptical. Foreign Ministry spokesman Vahan Hunanyan expressed hope for the effectiveness of the upcoming talks, but Yerevan has no illusions that the Armenian-Turkish differences will be resolved by the results of a diplomatic meeting alone. Perhaps the skepticism is explained by the choice of the Turkish side to appoint 63-year-old Serdar Kılıç, the former Turkish ambassador to the United States, who is known as one of the most active opponents of the policy of Armenian lobbyists in the US Congress, as a special representative. 30-year-old Ruben Rubinyan, a young diplomat, a member of the "Civil Contract", for whom the meeting became a kind of baptism of fire, went from Yerevan to Moscow. Perhaps the Armenian side thus unwittingly emphasized the technical nature of the negotiations, allowing critics of the ruling political elite to assume that all significant issues will either be or have already been secretly settled through alternative channels of communication.

Now Ankara is making the most cautious steps towards Yerevan, not questioning the effectiveness of the Russian peacekeeping policy in the region, but at the same time, trying to influence the Armenian foreign policy doctrine. Turkey initiated the reset of the Armenian-Turkish talks. At the same time, the Armenian government is slowly trying to prepare the public for the opening of borders in Turkey. Many understand that the normalization of relations will benefit landlocked Armenia, both economically and politically.

It is also obvious that with the liberation of Karabakh and the reintegration of this region into Azerbaijan, a new page in history has been opened. However, the format of the last meeting does not affect the acceleration of the process of delimitation of the Armenian-Azerbaijani border: the special representatives don't have special political levers capable of significantly influencing this process. At the same time, in general, there is no need for anyone outside of Azerbaijan to supervise the Zangezur corridor project or put pressure on the Armenian leadership, since an agreement in principle on unblocking regional transport links has been reached. The atmosphere accompanying the signing of the document will allow Ankara to offer Yerevan to conclude a similar agreement, which will remove the remaining questions about any territorial claims from Armenia to Turkey.

One way or another, the negotiations that took place were predictably declarative. The published the Turkish and Armenian Foreign Ministries statements' texts are almost identical. It is still unknown when and where the next meeting will be held. It is possible that the intensity of the post-war settlement process will affect the timing of its implementation.