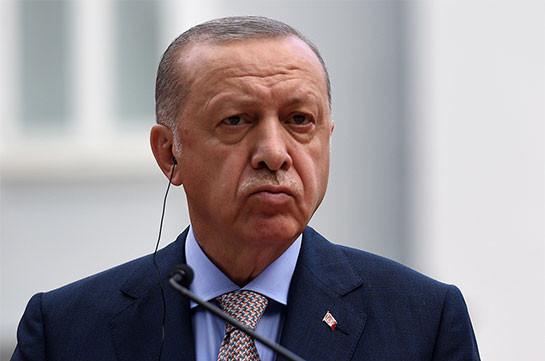 Turkish President Recep Tayyip Erdogan stated that it is important for Yerevan to correctly assess the chance to improve relations.

“Following the liberation of the lands occupied by Armenia by Azerbaijan, Ankara began the process of normalizing relations with Yerevan. In order for the steps taken to give the expected results, it is important that Armenia correctly assess the chance for long-term peace in the region. said the Turkish leader on Thursday at a meeting with the ambassadors of the EU countries at the Cankaya residence in Ankara.TASS adds: Armenia expects Turkey to establish diplomatic relations and open borders as a result of a dialogue with the participation of special representatives of the two countries. As Armenpress reported on Thursday , this was stated by the press secretary of the Armenian Foreign Ministry Vahan Hunanyan.
“Armenia’s expectations from this dialogue are essentially the same as since the early 1990s. We expect that as a result of the process diplomatic relations will be established between Armenia and Turkey, the border between the two countries will be opened, which was unilaterally closed. Turkey in the early 90s,” he said.

According to Hunanyan, Armenia has always stated that it is ready to normalize relations with Turkey without preconditions. “As we have already noted, in our contacts with international partners, we have repeatedly emphasized the need to comply with the principle of” no preconditions. “In our opinion, the Turkish government also shares the approach to starting a dialogue without preconditions,” he added.

The spokesman for the Armenian Foreign Ministry also specified that the first meeting of the special representatives of Armenia and Turkey to establish a dialo-gue between the two countries, which is scheduled for January 14 in Moscow, will be of an introductory nature. “One should not expect that as a result of the meeting alone it will be possible to achieve tangible results, but the process will start,” he said.

Ankara has appointed former Turkish Ambassador to the United States Serdar Kilic to the post of special representative, and Yerevan – Deputy Chairman of the Parliament Ruben Rubinyan.

In December, Turkish Foreign Minister Cavuso-glu said that in order to normalize relations with Ar-menia, the parties will soon mutually appoint special envoys, and charter flights with Yerevan will also be opened.

The Minister noted that Ankara is considering the applications of Turkish and Armenian airlines for flights Istanbul – Yerevan – Istanbul. And Turkish Tra-nsport and Infrastructure Minister Adil Karaisma-iloglu stated that the Turk-ish Pegasus airline will be-gin operating flights betwe-en Istanbul and Yerevan in the coming days.

There are no diplomatic relations between Turkey and Armenia, the border between the two countries has been closed since 1993 at the initiative of Ankara.

Difficult relations between the countries are caused by a number of circumstances related, in particular, to Ankara’s support for the Azerbaijani position on the Karabakh problem and Turkey’s acute reaction to the process of international recognition of the 1915 Armenian genocide in the Ottoman Empire.