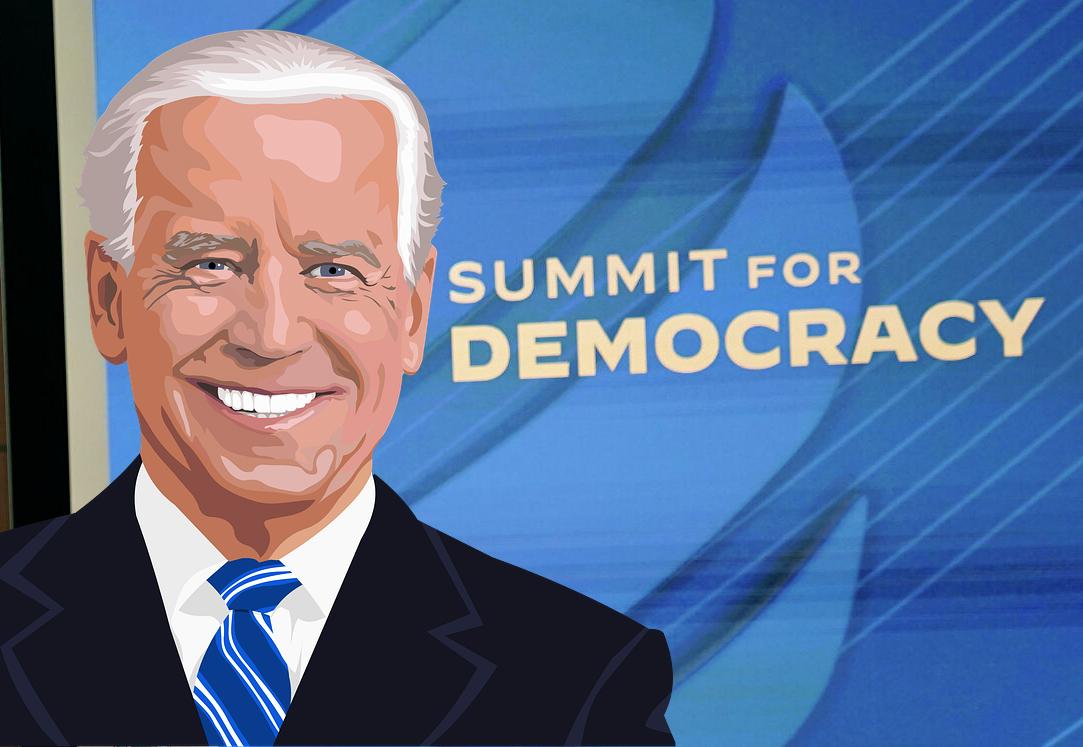 As Asia Times notes, leaders from 110 countries (the guest list includes Pakistan, Ukraine and Brazil) who work in government, civil society and the private sector, with the officially declared purpose of developing an agenda to renew democratic government and keep democracy’s ideals strong.

But how to square this high-sounding project when just a few months ago “America is back” was Biden’s mantra as he met with the Group of Seven in Cornwall? Biden’s emphasis in the European meetings was bolstering NATO allies for a new global face-off with Russia and China. Despite existential threats posed by catastrophic climate change (which Biden and other world leaders inadequately addressed at COP26) and an ongoing global pandemic, Biden’s new normal seems ominously leaning to a revival of Cold War politics.

“We are committed to the rules-based international order,” concludes the final communiqué from the June NATO meetings, but “Russia’s aggressive actions constitute a threat to Euro-Atlantic security. China’s growing influence and international policies can present challenges that we need to address together as an alliance.”

Much of the plan addressed bolstering the North Atlantic Treaty Organization’s growing military capabilities on the Russian borders, and the alliance for the first time also designated China as a “systemic challenge.”

As the Democracy Summit convenes, old Cold War tropes are indeed being recycled. In a rare joint op-ed, China’s and Russia’s ambassadors to the US depict the summit as an “evident product of its Cold War mentality, [which] … will stoke up ideological confrontation and a rift in the world, creating new ‘dividing lines.’” In the United States’ narrative that is described in the Chinese and Russian ambassadors’ warning, the world is divided between democratic and authoritarian nations. The US has never ceased to paint the latter as repressive and rapacious, threatening their neighbors and working to disrupt a presumably benign rules-based order.

China is the new “No 1 pacing challenge,” as Defense Secretary Lloyd Austin put it in March, with Russia relegated to second place.

The United States insists, that it and its NATO allies invest to maintain superiority in every domain of warfare – land, air, sea, space and cyber – and in every region from the borders of Russia to the South China Sea.

In a Washington addled by bitter partisan divides, the call to meet the threat posed by China and Russia forges bipartisan consensus.

Republican Senator Tom Cotton wrote in a February report titled “Beat China” that he sees the Asian country as the new Soviet Union: “Once again, America confronts a powerful totalitarian adversary that seeks to dominate Eurasia and remake the world order.”

As during the Cold War with the USSR, with China, the threat abroad is being used to justify action at home.

When it comes to investing in the American people, Republicans such as Cotton see big government as evil and industrial policy as creeping socialism; when it comes to foreign policy, they eagerly join the call for updating “America’s long-term economic, industrial and technological efforts to reflect the growing threat posed by Communist China.”

The same Republican senators who couldn’t bring themselves to back an investigation into the sacking of the Capitol on January 6 rush to support research and development when framed as addressing threats posed by Chinese investments.

While dangerous, a Cold War face-off between democracies and authoritarian states, anchored by China and Russia, is the establishment’s sweet spot. The powerful military-industrial security interests gain renewed importance.

The tremendously bloated Pentagon budget continues without question as it presumably gears up for new deployments, and a new array of weapons to counter growing Chinese assertiveness. NATO gets a revived mission. A bipartisan center can be re-established, with bickering about tactics and spending anchored by an agreement on mission.

The costs of going back to the Cold War are immense, however.

While Senator Bernie Sanders praised Biden in June for recognizing authoritarianism as a “major threat to democracy,” he wisely cautioned that “the primary conflict … is taking place not between countries but within them.… And if democracy is going to win out, it will do so not on a traditional battlefield but by demonstrating that democracy can actually deliver a better quality of life for people than authoritarianism can.”

It also deeply distorts the real security threats the US faces. This summer, as the impacts of extreme weather exacted an ever-greater toll on American lives and resources, it became increasingly difficult to pretend that climate change is only a distant threat. No progress can be made without China, which now leads the world in fossil-fuel emissions and at COP26 pledged to cut them to net zero by 2060.

Climate can no longer be relegated to a rhetorical statement of concern at the end of documents focused on military buildups and great power conflicts in peripheral countries.

A renewed Cold War would reinforce the nationalist and militarist factions in all countries. More than a year after Trump left the presidential office and social-media platform from which he could amplify his lies about China and Covid-19, the fearmongering he fueled continues to contribute to a rise of hate crimes against Asian-Americans. This is but one of many aspects of how the deep fractures within the US will make revitalizing its democracy even more difficult.

Before the US chooses to lead any kind of “Summit for Democracy,” and before “America is back” to a new Cold War, the country urgently needs a more serious discussion about its real security priorities – and the real challenges it faces.