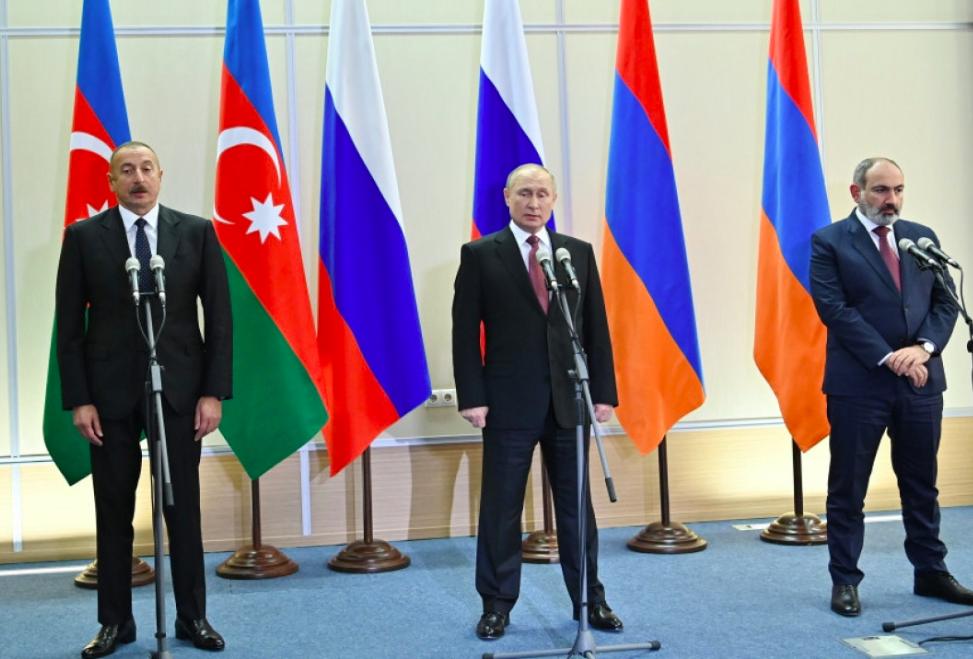 Yesterday's trilateral meeting between Russian President Vladimir Putin, Azerbaijani President Ilham Aliyev and Armenian Prime Minister Nikol Pashinyan turned out to be an important new stage on the way to a peaceful future for the South Caucasus. The parties simultaneously summed up the results of the work done over the year, discussed all the latest issues of the post-war settlement and formed a single official position on further peace processes.

Russia, Azerbaijan and Armenia reaffirmed their commitment to the opening of transport communications, including the Zangezur corridor between Zangilan and Nakhchivan described in the 1st November Statement, positively assessed the work of the Russian peacekeeping mission and agreed to start the process of delimitation and demarcation of the Armenian-Azerbaijani border, which is the first important step towards a peace agreement between the two republics.

It is extremely important that the nature of the trilateral interaction is changing in the new Statement: the commission on delimitation and demarcation of the border will be bilateral, and Russia will only play the role of a consultant. The first emergency post-war year, when Moscow’s tight control was required on Yerevan, drowned in political chaos, has passed, Nikol Pashinyan's regime confirmed the legitimacy of his power back in June, and now the time has come for direct interaction between the state structures of Azerbaijan and Armenia, and not exclusively through an intermediary. Thanks to this, in particular, the destructive forces in Yerevan will no longer be able to shift the responsibility for their actions onto the shoulders of Russia and hide behind its back. Russia does not leave the South Caucasus, but now the Armenian authorities will interact primarily with Baku. The moment is the most convenient for this.

Azerbaijan, in turn, did not allow the erosion of the negotiation process with a false agenda. This task is one of the central at the political and diplomatic level - both Baku and Moscow are well aware of how Yerevan is able to slow down a peaceful dialogue with fake accusations and extraneous claims, and a year after the surrender, the Armenian state created a whole system of such claims and accusations. After the war, it is fundamentally important that the practical work on the settlement of the Armenian-Azerbaijani relations does not stop. As a result, there is not a single wording convenient for revanchists in the text of the 3rd Statement. Although the war is over on the ground, those who oppose peace in the South Caucasus continue to be subversive and must be fought day after day. On November 26, in Sochi, Baku with Moscow’s support once again defeated the destructive forces.

But Armenia also won. Although Nikol Pashinyan clearly looked lost and outsider against the background of the complete mutual understanding between Vladimir Putin and Ilham Aliyev, as if Russia and Azerbaijan were allies, and Armenia was a conflicting party with them, in fact, the Armenian prime minister also returned home with a victory. Pashinyan has exactly the same opponents in the South Caucasus as Putin and Aliyev: the revanchist forces of the Karabakh clan presented by Robert Kocharian and Serzh Sargsyan opposing both him, Azerbaijan and the peacekeeping efforts of Russia. Since the Pashinyan regime still does not fully control the power in Armenia, especially the army, the “revolutionary” prime minister is constantly faced with the dilemma of how to resolve problems with neighbours without losing power and eliminating internal enemies. The 3rd Statement gives him such an opportunity: on the one hand, in order to safely return to Yerevan, he can say that the false agenda he voiced was not included in the document at Moscow's insistence; on the other hand, he once again accepted all previous obligations and took new, which in a direct dialogue with Baku can no longer be delayed. And the people of Armenia benefit even more from the opening of communications, the delimitation of the border and the future peace treaty with Azerbaijan.