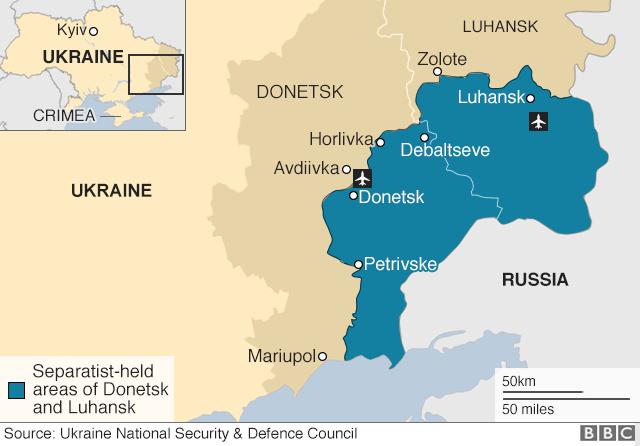 Ukraine says its troops on the eastern front line have come under heavy shelling during a rebel attack, with one soldier killed and four wounded, BBC reports.

It says four rebel soldiers were killed and six injured. Russian-backed rebels say Ukrainian forces tried to break through their lines and got caught in a minefield, with two killed and three wounded.

Ukraine's President Volodymyr Zelensky said the rebel "provocation" would not derail Kyiv's course to achieve peace. The violence puts new pressure on a shaky ceasefire deal. Tuesday's clash, now said to be over, took place near Zolote, a front-line village in the Luhansk region of Donbas.

The conflict began in 2014, and the rebels control large swathes of the region, including the cities of Donetsk and Luhansk.

"The occupiers are firing on our defenders using weapons banned under the Minsk [ceasefire] agreements. The enemy is using 120mm mortars and firing various grenade launchers and heavy machine-guns. Under the cover of firing, the Russian occupiers have switched to offensive actions and have tried to cross the contact line," the JFO statement said.

A local official, Vitaliy Shvedov, said the intense shelling was similar to the peak of fighting in 2015.

The JFO said its forces had not lost ground to the rebels who, it said, had requested a ceasefire.

The chief of Ukraine's general staff, Ruslan Khomchak, said at a briefing later on Tuesday that four enemy soldiers were killed and six injured.

In recent months there has been cautious progress towards a peace settlement: there were significant prisoner exchanges and talks between Mr Zelensky and Russian President Vladimir Putin, mediated by France and Germany.

After a meeting of Ukraine's security council, President Zelensky called Tuesday's flare-up "an attempt to wreck the peace process in Donbas, which had started to move forward with small but continuous steps".

He said two Ukrainian service personnel had been killed and three injured as they tried to get closer to LNR positions.

More than 13,000 people have died in the conflict, which dates back to April 2014, when the separatist rebels seized key areas of the Donetsk and Luhansk regions.

The rebels have Russian heavy weapons, and Western experts say Russian regular units have bolstered their ranks. The Kremlin denies that, while admitting that Russian "volunteers" are helping the rebels.