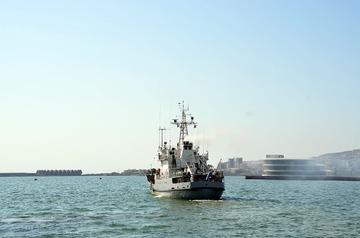 "Astrakhan" and "Anatoly Gujvin" warships of the Caspian Flotilla of the Navy of the Russian Federation left the port of Baku on September 20, the Azerbaijani Defense Ministry said, News.az reports.

On September 18, the warships of the Caspian Flotilla arrived in Baku on a friendly visit.

As Azertac previously reported, during the visit, the Command of the Navy of the Azerbaijan Naval Forces received the crews of the ships as well as discussed military cooperation between the navies of the two countries.

Within the scope of the program, crews of the ships have had excursion in the city of Baku in order to get acquainted with cultural and historical monuments, as well as have held friendly volleyball match.