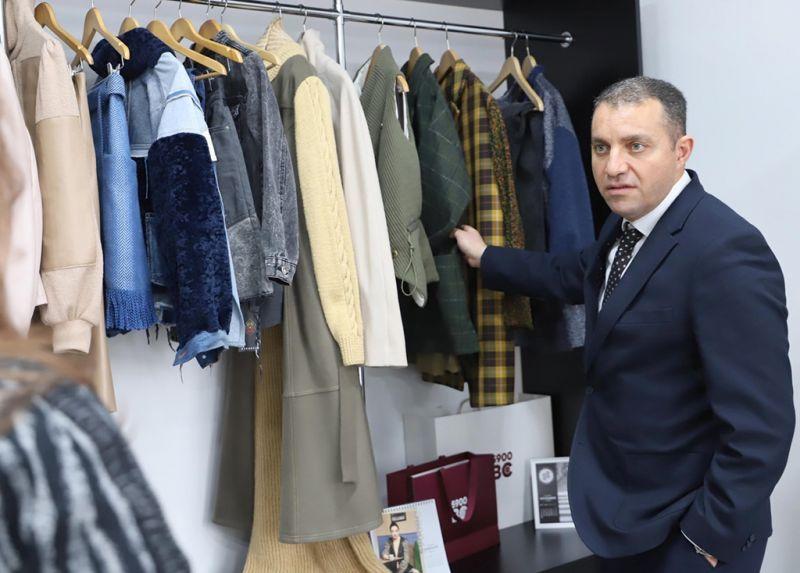 Last December, a prominent spot on Yerevan’s central Abovyan Street was home to an outpost of the Turkish fast-fashion chain Mavi.

But following a ban on Turkish imports into Armenia, a reaction to Turkey’s extensive support for Azerbaijan in last year’s war, Mavi is gone, replaced by a homegrown substitute: Prime, a new Armenian label selling hipster reinventions of everyday basics. The store is packed with sweatshirts, jeans and T-shirts of all shapes and sizes. A selection of accessories – handmade by one of the salespeople – hangs on the wall.

Before the ban, clothing comprised the single largest category of Turkish imports to Armenia. Local production of textiles had been slowly growing for years, but has been kickstarted by the embargo.

“The ban helped a lot,” said Elen Manukyan, the co-founder of the Fashion and Design Chamber, a non-profit aimed at supporting and promoting Armenian designers. As Turkish clothing has disappeared from the Armenian market, local producers started offering a broader variety of products instead of the usual assortment of underwear and socks. “In addition, the war changed people’s attitude towards Armenian-made products. Consumers started prioritizing Armenian things,” Manukyan told Eurasianet.

The Fashion and Design Chamber supports local designers by helping them access investment, training, and international fashion shows. The government has helped, too, providing tax cuts to major textile investors.

Over 100 large and small companies are engaged in the sector. Still, the activity is a far cry from Soviet days, when Armenia exported clothing throughout the USSR and textiles employed 150,000 people, a quarter of the workforce, compared to around 8,000 today.

The Armenian government first developed a strategy to promote development of the industry in 2013. The plan drew attention to unused potential manufacturing capacity and projected double-digit growth. Production has indeed grown significantly, with output value tripling between 2015 and 2019 (data for 2020 is not yet available).

But many challenges remain. Armenia used to source most of the fabrics from Turkey. And while the embargo does not apply to raw materials such as cotton, experts predict that the Armenian textile industry’s sourcing map will have to change. Another serious challenge, Manukyan says, are undeveloped business skills and poor schools.

“Universities do not have the necessary technical equipment and curricula are outdated,” she said. “But little by little we have educated the domestic consumer; they have started buying Armenian. Designers also have changed their attitude and now work on mass production to offer affordable clothing.”

That change is easy to see on Yerevan’s streets: Whereas Armenian-made clothing used to be restricted to a few haute couture offerings, more recently mid-size brands offering cheaper but unique clothing have come on the market.

Some of these labels emphasize Armenian culture – shirts adorned with letters of the Armenian alphabet, Christian symbols, ornaments from classical Armenian art – to attract customers from the large global diaspora.

Other new designers try to appeal to local youth by reinterpreting symbols from popular culture. One, Light Affect, has built an identity around the image of “qyarts” – members of a subculture of powerful, semi-criminal street thugs from the 1990s and early 2000s, which have been transformed from objects of fear to that of ironic mockery.

Another brand with a similar aesthetic, Prime, features stylized illustrations of Armenia's landscapes. Some of Prime’s T-shirts feature famous mountains and hiking boots. The company also has a line of shirts with Soviet cars – retro models much older than the brand’s target audience.

Designer brands with higher price tags have a harder time getting a foothold in the Armenian market, where most consumers have little to spend. Vahan Khachatryan, an Italian-trained co-founder of the Fashion and Design Chamber, sells haute couture clothing worn by celebrities. Others – like LOOM Weaving, which focuses on knitted items or ZGEST, known for its dresses – offer mid-range prices, yet the cost of a single item can be comparable with Armenia's monthly minimum wage.

Some small designers work together, setting up stores under the slogan “Made in Armenia.” One such shop, 5concept on Yerevan’s central Sayat Nova Avenue, offers clothing by dozens of Armenian labels, most of which are too small to afford their own boutiques.

Manukyan of the Fashion and Design Chamber is optimistic that Armenian-made clothes will soon be a significant force in the local market.

“Six or seven years ago there were only individuals who worked with custom orders. And factories would just take orders from Russia, sew and ship,” she said. “Now we have serious brands, and new names emerge every day. The [design] field is very active, and it goes hand in hand with textiles because the number of factories is growing, too.”