Not accepted to EU Balkan countries create their own mini-Schengen 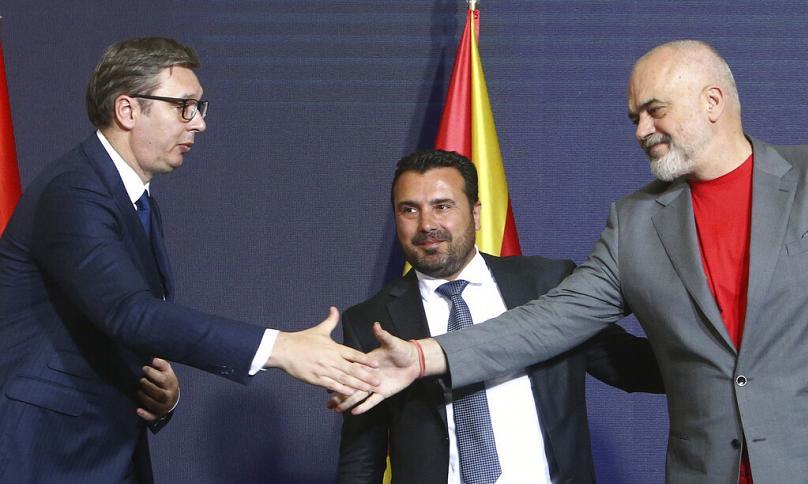 Serbian President Aleksandar Vučić, Albanian Prime Minister Edi Rama, and Macedonian Prime Minister Zoran Zaev were all smiles as they took a stroll through the Macedonian capital of Skopje in late July after signing a trilateral economic agreement at a regional business forum, Euronews writes. Called the Open Balkan initiative, the idea of forming a common market for countries waiting for EU membership was previously known as Mini-Schengen Area.

The initiative is trade-heavy, and it promises free movement of goods and citizens and equal access to labour markets. Participating countries would save up to $3.2 billion (€2.71 bn) each year, according to World Bank estimates. A previous attempt was made during the Berlin Process, a German-led cooperation initiative designed for the Western Balkan countries, which never culminated in a binding agreement. The Berlin Process started in 2014 was meant to assuage increased Euroscepticism in the region after then-EU Commission president Jean-Claude Juncker announced a five-year moratorium on the union's admission of new members. Seven years later, the region's countries are trying to prove they can do things on their own, with or without the EU's help.

Belgrade to Tirana without any checks?

Albanian PM Rama said in Skopje that the move is aimed to prevent the Western Balkans from getting stuck in "a small caricature of the EU, where for everything you need consensus and everyone can block through a veto". Rama, who has been increasingly more vocal in his criticism of the EU approach to accession, was backed by PM Zaev. Although EU membership remains a goal for all three, "until the EU decides, we need to find ways to continue the process of Europeanisation,” said Zaev.

Both the Albanian and Macedonian leaders have been critical of Bulgaria's veto on the two formally opening accession talks due to the ongoing language debate between the two, with Bulgaria claiming issue with calling the language spoken in North Macedonia Macedonian. Serbian PM Vučić was also positive, stating that "it's time to take things in our hands and decide on our destiny and future ourselves" and boasted about the fact that "from January 1, 2023, no one will stop you from Belgrade to Tirana." But going ahead without all six Western Balkan countries taking part might backfire and create new divisions in the region.

The biggest elephant in the room is Kosovo, which Serbia does not recognise as an independent state and claims its former province -- located geographically right in the middle between Serbia, North Macedonia and Albania -- is actually a part of its territory. Kosovo declared independence in 2008 after the 1999 NATO intervention led to a withdrawal of Belgrade-controlled forces from the ethnic Albanian-majority province. Since then, Serbia has actively tried to prevent Kosovo from becoming a full-fledged member of international organisations, such as the United Nations, and has significantly jeopardised its EU integration process. Serbia has also led an international de-recognition campaign, in an attempt to deny it its status.

Now Vučić, who was Milošević's minister of information in the 1990s, is leading the initiative, much to the apprehension of the leaders of the three abstaining countries. Kosovo's leadership, including PM Albin Kurti, have slammed the initiative. In August, Kurti stated that Open Balkan is "a Balkan open to autocracy, corruption and war criminals".

This illustrates the ongoing tensions between Kurti and Vučić, but also Rama. According to Gjergi Vurmo from the Institute for Democracy and Mediation in Tirana, the clash between Kurti and Rama has degraded the traditionally good relationship the two countries -- both boasting ethnic-Albanian majorities -- have enjoyed. "Last year's report of the EU Commission for Albania had a very interesting difference," Vurmo points out, "all other EU reports on Albania on regional cooperation and relations with neighbours have noted excellent relations between Albania and Kosovo". Last year's report said Albania's relations with Kosovo are now ‘good’ — just like with Serbia and North Macedonia, for example.

"So, we have a sort of official confirmation that the relations are not at their best. And I think that the blame is to be found on both sides. Maybe it was Albania and more specifically Rama's mega-ego and intention to play the regional leader that takes care of Kosovo. But there is blame to be placed on some politicians on Kosovo's side," Vurmo explains.

Kurti's party in Kosovo, Vetevendosje or VV, is trying to become a more established political subject in Albania and even participated with candidates in April’s elections. It seems like Kurti is trying to expand his political influence across the border, and disagreements over the initiative are a way to gain the support of those who don't see eye to eye with Rama. But this struggle between Kurti and Rama distracts from more substantial issues, such as what this represents for the rule of law and the overall state of democracy in the region, said Vurmo.

"To me personally, what matters the most is a) is it inclusive? It's not. It cannot be called Open Balkan with only three countries as members. And b), what does it mean for democracy? It means absolutely nothing," he explains. "It means nothing because it's a tactical project that makes sense to Vučić and Rama, and it doesn't make sense with what citizens want." “Because at the end of the day, what is the primary reason why foreign direct investments don't come to the Balkans? Because they don't trust the judicial system. "Our business people in Albania, do you think they would trust the judicial system in Serbia? Or that in, say, Bosnia, if they eventually join the mini-Schengen? No," Vurmo concludes. 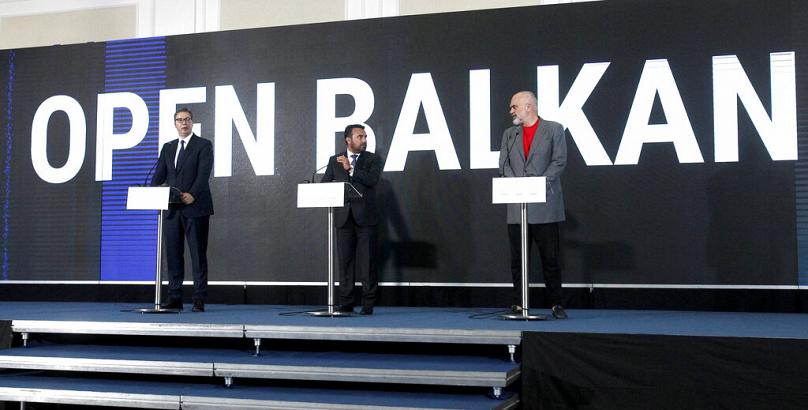 Is Vucic trying to fill the EU vacuum?

Toby Vogel, an analyst at the Democratization Policy Council, a Berlin-based think-tank, believes that for the likes of Rama and Vučić, the Open Balkan initiative is indeed a publicity stunt aimed to show off their personal power and contrast it with the EU's impotence in the region. "Vučić is trying to diversify," Vogel says. "He's been trying for some time now to really strengthen relations in the region — so to no longer be seen as the champion of [solely] the Serbs. " "Vučić's ambition is bigger. He sees himself as the regional leader and of course being leader of all Serbs is helpful in all that, but as soon as it clashes with his regional ambition I think he's going to go for the regional role," he explains.

This marks a significant shift in Vučić’s strategy over the years, who began his political career as a zealous ultranationalist at the Serbian Radical Party, and then moderated some of his views -- including on EU accession -- when he formed the Serbian Progressive Party. In the past years, Vučić would usually play a pro-EU card in Brussels while holding on to nationalist views in the region. By his own admission, he claims to have grown politically over the years.

"This we've seen from the vaccine story, where it's been very clear that the message was 'we can do stuff where the EU has failed,'" Vogel illustrates. “We are showing our solidarity with our brothers in North Macedonia, Bosnia, and so on by giving them vaccines or letting them come to get vaccinated and all that."

But when too few Balkan countries participate, pitting one side against the other could create significant divisions. Issues that still plague the Western Balkans, such as rampant ethno-nationalism that have led to Bosnia being ambivalent about joining a Vučić-led initiative. Some of Montenegro's leaders, too, like Milo Đukanović, are pushing back against the rise of Serb nationalism in the country. These issues won't be resolved through a purely economic approach, he believes. "Anyone who thinks that this is a confidence-building measure, I think they are underestimating the dangers of that economy-focused approach," Vogel stated. "Economic cooperation is going to run up against the reality of political tensions and political obstacles sooner or later. The EU and the international community more generally have a tendency to pivot towards the economy when political issues get too tough. And this has never worked because the political issues are going to catch up with the economic ones," he said.

But the EU in particular is happy to see how this plays out, according to Vogel. "There are a few people in the EU institutions that are willing to admit — only off the record, only in private — that the enlargement is dead, accession is not going to happen except maybe for Serbia and Montenegro. And I think they are thinking about the alternatives," Vogel explains.

And despite the countries in the region still having their sights set on becoming EU members, the Open Balkan initiative would not be a strong enough consolation prize in lieu of EU membership. "We've had more than 25 years of pious talk of integrating the region, peacebuilding, reform, rule of law, and European values. I think it would be quite hard for the EU officials to all of a sudden say ‘okay, you have your mini-European economic area in the Balkans, so, mission accomplished,’" he said. "Yet I can see that happening, because the EU is desperate to claim some level of success and acknowledge what's obvious to us all — that it's disengaging from the region in many ways."