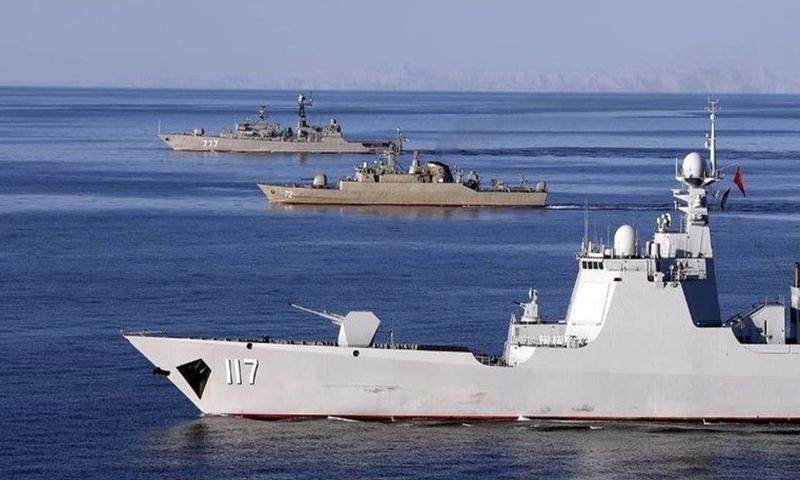 China, Russia and Iran will hold joint maritime exercises in the Persian Gulf around late 2021 or early 2022, according to Russian Ambassador to Iran Levan Dzhagaryan who was cited in a report by RIA news agency on Monday. Dzhagaryan said the drills are to "ensure the safety of international shipping and the fight against sea pirates." As Global Times writes, it is vital for China, Russia and Iran to ensure the safety of international shipping. Most of Russia's international trade is carried by cargo ships. Iran also relies on shipping for its oil exports. China's imports of oil and gas and some other foreign trade depend on shipping as well. To ensure the safety of shipping is to safeguard the economic security of the three countries. Therefore, it is normal to see China, Russia and Iran cooperate in terms of navy, especially their joint efforts against regional hegemony and sea pirates.

When reporting the news of the drills, the New York Post mentioned that, "The news comes as the US struggles to complete its withdrawal from Afghanistan." China, Russia and Iran are friendly partners. The three countries are engaging in cooperation in various fields, and as regional countries, are keeping a close eye on the ever changing Afghanistan situation. The US' hasty withdrawal will inevitably lead to a crisis and uncertainty in Afghanistan. The three countries' cooperation in this regard will help maintain Afghanistan's domestic peace and prevent the spread of terrorist forces. But their main consideration for the joint military drills is to secure the safety of international shipping of the Persian Gulf, and has little to do with the Afghanistan situation.

The joint military exercises among China, Russia and Iran are of the political significance. This shows that China and Russia firmly support Iran in maintaining its legitimate foreign trade, especially via shipping. Beijing and Moscow support Tehran's reasonable demand concerning the Joint Comprehensive Plan of Action on the Iranian nuclear issue, and encourage Iran to strengthen its capabilities to guarantee regional security. This can prevent Western forces from deeply interfering in the regional affairs in the Persian Gulf and Iran's internal affairs. China and Russia may hope to boost Iran's military capabilities by virtue of the drills as well, so that Iran can effectively counter the threat from the Western countries.

Cooperation among China, Russia and Iran is centered on mutual benefits and win-win, rather than forming an alliance and engaging in confrontation. Take China and Iran. Iran can provide China the much-needed oil, and Iran hopes to increase its economic strength by expanding its energy exports.

Now, the US is imposing its ideology on all of the countries. It has been trying to forcefully divide the international community into two camps. It is even eyeing for hosting the Summit for Democracy. The US' shameful record in democracy and human rights is widely known. The US' move could only make the international community realize the hypocrisy of US democracy and human rights. The US turns a blind eye to the severe situation of the COVID-19 pandemic, which has resulted in the death of more than 600,000 lives in the US. Washington is not qualified to talk about "democracy and human rights." Its attempt to create a so-called democratic alliance is doomed to fail.

When dealing with international relations, most countries think about their own interests rather than dancing to the US rhythm. Washington thought it could lead the other countries by the nose by touting out the so-called democratic values. But such a baton does not work anymore. These countries eye pragmatic interests, and will not serve US hegemony.