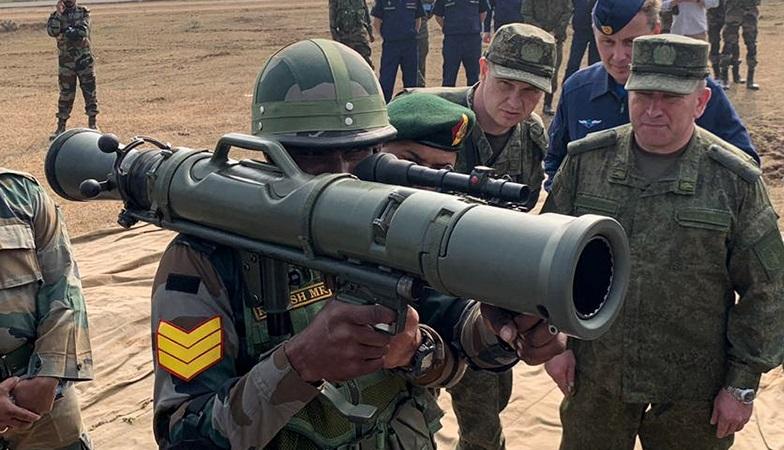 Ahead of the inauguration of the Army 2021 Expo in Moscow on Sunday, Rosoboronexport JSC expressed its readiness to offer to India the whole range of small arms and light weapons, including assault rifles, machine guns, sniper rifles, submachine guns, pistols, grenade launchers etc, Financial Express reports. “All what is being offered to India have been tested and are known for their reliability, and lots of these weapons have proven their effectiveness in real combat use. Russia has also developed technical means to train small arms use, which can be integrated into a joint virtual environment to conduct full-scale training sessions.

We are ready to demonstrate the above-mentioned weapons to our Indian partners, launch deliveries, and conduct joint works to establish licensed manufacturing,” a Rosoboronexport official dealing with the media confirmed to Financial Express Online on Sunday.

The official who wished to remain anonymous said, “Russia and India previously signed an intergovernmental agreement (IGA) to set up the Indo-Russian Rifles Private Ltd. Company to manufacture Kalashnikov AK203 assault rifles. The capacity of the Korwa-based enterprise is sufficient to arm the personnel of all the uniformed services of India.”

“Should it become necessary, both sides are ready to increase the output of production and upgrade to manufacture future models which are based on the Kalashnikov rifle’s unique design. And, under India’s Atmanirbhar initiative, the 100 per cent localization of the manufacturing processes is envisaged,” he added.

Rosoboronexport JSC (part of the Rostec State Corporation) is likely to conclude several contracts with foreign customers at this expo. This expo is starting today August 22 and will go on up to August 28, 2021 on the premises of Patriot Congress and Exhibition Center of the Armed Forces of the Russian Federation.

According to Alexander Mikheev, Director General of Rosoboronexport, “The Army Forum is the main platform. And it enables Rosoboronexport to demonstrate the widest range of Russian products for the Special Forces and police units to foreign customers. And also for different branches of the armed forces and all services.”

In total, representatives of around 150 countries invited through the Ministry of Defense of Russia, the Federal Service for Military-Technical Cooperation of Russia and the Rostec State Corporation are also taking part in the expo.

For the first time the newest T-14 Armata tank, combat vehicles based on the Boomerang combat platform will be displayed. And, the Orion-E reconnaissance/strike UAV, which is the star of this year, the Antey-4000 battlefield anti-aircraft missile system designed to equip the land forces, and the Pantsir-S1M air defense gun/missile system are being displayed. “There are going to be the fifth-generation Su-57 fighter, helicopters, the BK-16 high-speed landing boat, and the latest small arms,” added Alexander Mikheev.

What will be of interest for the Indian Army during the expo will be small arms. This includes Kalashnikov AK-100 series, AK-200 series, AK-12, AK-15 and AK-19 assault rifles. On display will also be KORD assault rifles, sniper rifles and machine guns which are being manufactured by the Kalashnikov Concern and the Degtyarev Plant, which are part of the Rostec State Corporation.

On display are equipment and gear for Special Forces and security agencies. The Dominator, Sumrak (Twilight) sniper rifles, Lobaev Arms Volkodav (Wolfhound) will be on display.