Aliyev: I am sure that the elections will play important role for further development 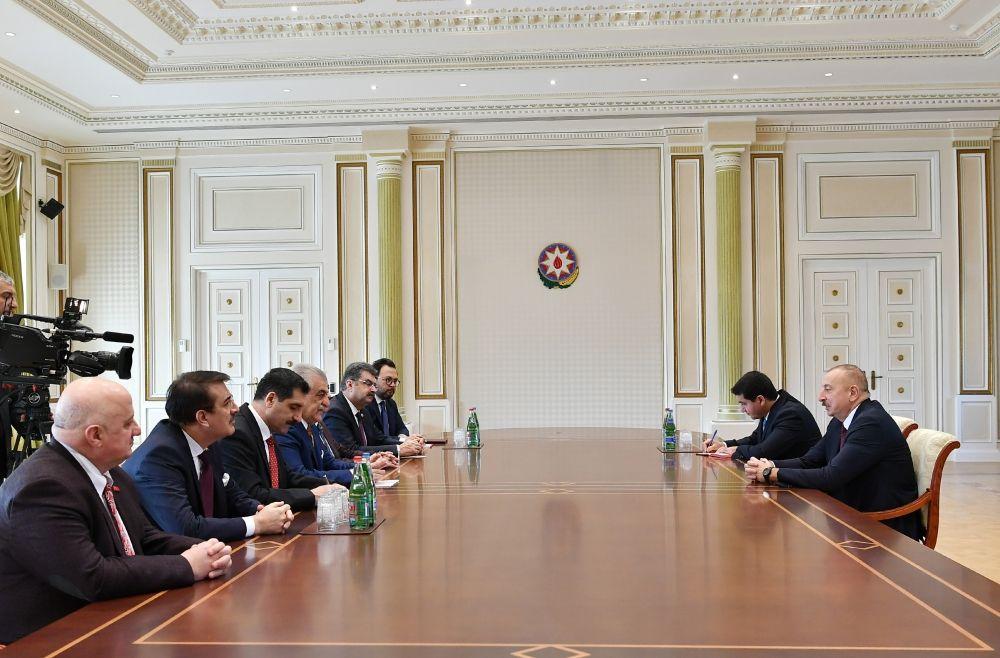 President of the Republic of Azerbaijan Ilham Aliyev has received a delegation led by head of the Turkey-Azerbaijan interparliamentary friendship group Samil Ayrim, Trend reports.

"These elections were indeed very important because they should support the reforms ongoing in Azerbaijan," Aliyev said during the meeting. He also added that the main objective of the early elections was to continue the reforms without wasting any time. Structural reforms have been carried out, both the government and the Presidential Administration have been reorganized and, of course, the Milli Majlis (parliament) could not stay on the sidelines of all this. "Therefore, I am sure that these elections will play a very important part in the further development of Azerbaijan. Because our legislation must comply with the growing pace of development of the country. At the same time, our international relations are expanding and Azerbaijani MPs should continue to represent the country in international organizations at a proper level," he said during the meeting.

President Aliyev also stressed that Azerbaijan as a whole is pursuing a policy of giving preference to the younger generation. "This, however, should be carried out in a very thoughtful manner. The experience of the older generation, the inclination of young people to innovation, its knowledge and attention to modern processes – we are striving for this unity. I believe we have achieved this. I was informed that the elections in the country were held in a very calm atmosphere, within the framework of the legislation and there were no worrying aspects," the Azerbaijani leader underlined. "There was a lot of interest in these elections. I don’t remember ever seeing more than 1,300 candidates in any parliamentary elections in Azerbaijan. So this in itself indicates that the elections were held in a competitive environment and the process of registration of all candidates was fair. Such a number of candidates is an expression of confidence in the elections. Because if there was no confidence, these people would probably not have participated in the elections. Therefore, the current elections have a special role."

Aliyev also touched upon the opinion of international observation missions. "We have long been accustomed to their negative opinion. In some cases, their conclusions are written in advance, and not by themselves but in other places, and then sent to them. We've seen this done repeatedly. You have also noted the negative attitude of the Council of Europe towards us. The latest manifestation of that has been a resolution which is based on lies. In other words, the adoption of this resolution essentially represents a flagrant interference in the parliamentary elections. First of all, this resolution is fake and we do not accept it. We reject the charges brought against us and will not comply with any of the “requirements” contained in it. Secondly, notice the timing of this resolution. Its adoption in the run-up of the parliamentary elections is a testament to the negative and unfair attitude towards Azerbaijan," said President Aliyev. "These elections are a manifestation of the will of the Azerbaijani people. If the Azerbaijani people were dissatisfied with these elections, they would show it. You also saw today that there is an absolutely democratic atmosphere in Azerbaijan. Elections and the way they were conducted are one of the manifestations of democracy. If the candidates were so active during the election campaign, which is actually the case and you also noted this – they went from home to home to communicate their position to the voters – then, of course, if they were unhappy with the elections, they would have stated that quite openly. But we have not come across such facts yet. This is further evidence that these elections reflect the will of the Azerbaijani people, and this is what matters most."