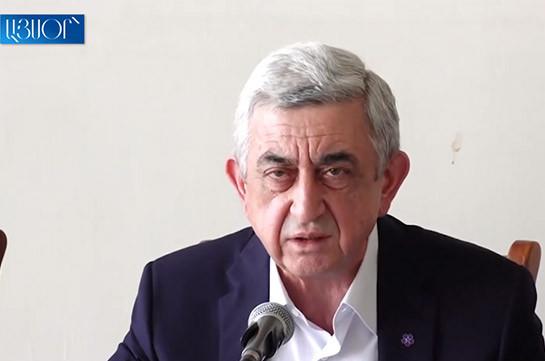 Armenia’s third president Serzh Sargsyan said he is with 100% against the idea of corridor.

“We cannot give corridor to anyone. How can we? What for?” Sargsyan said at the meeting with supporters of “I Have Honor” bloc in Masis.

Sargsyan said the communications in the region may open and there is no issue there.

“But what corridor? Are we obliged? Do we have to give them corridor? With what document? With what arrangement? For what?” the third president said.

Asked about possibility of arrangement with Russia and Turkey, Sargsyan said he is not aware of it.

“If we accompany them [incumbent authorities] out, I assure you, neither of the authorities will think about any corridor,” he said.

“How can we separate a part from our territory and say we give this section under this one’s control. It is excluded,” he said.