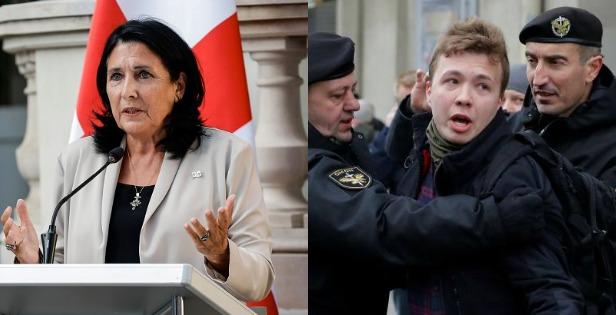 Georgian President Salome Zurabishvili responded to the fact of diverting the Athens-Vilnius flight and the arrest of journalist Roman Protasevich on social media.

“The forced landing of the Ryanair flight in Belarus and the arrest of a journalist are unacceptable. This violates too many international norms to be ignored,” she wrote.

Roman Protasevich, an opposition journalist, was arrested in Minsk. A Ryanair plane flying from Athens to Vilnius with a journalist on board carried out an emergency landing at Belarus airport. The plane was forced to land in Belarus in order for the journalist to be arrested. The Belarusian state media reports that the plane landed in Minsk due to the threat of a bomb on board, however, no explosives were found on the plane.

The arrested journalist says that Lukashenko’s regime accused him of rioting and he faces the death penalty.