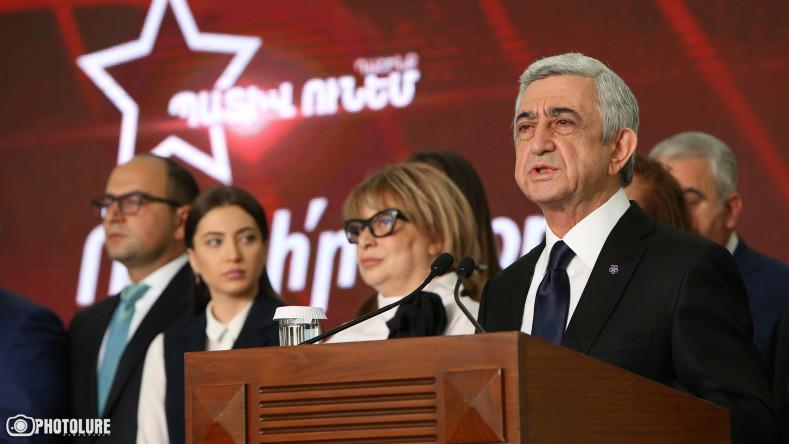 The signing of a memorandum on the formation of an electoral alliance between the former ruling Republican Party of Armenia (RPA) and the Homeland Party marks the start of a “mission of honor” seeking to get rid of the “capitulated" authorities, RPA Chairman Serzh Sargsyan said at the signing ceremony on Saturday.

“By signing the memorandum on forming the Salute of Honor and Respect electoral bloc, we will announce the launch of this round of our cause of honor, namely that after the opposition’s victory in the upcoming elections, we will get rid of these disgraceful, capitulated authorities who failed in governing the state, jeopardized the nation’s future and the future of our statehood,” he noted.

Sargsyan said they will make efforts to fully restore the sovereignty of Armenia and “return to the people the right to live and work in their homeland in peace, security, dignity and with faith in tomorrow.”

“We have no moral right to step aside and indifferently watch the collapse of the state. The geopolitical developments, the globally increased tensions, the events taking place in our neighborhood, the dangers that directly threaten us, coupled with the current Armenian authorities’ inadequate behavior, give no reason to hope that in such conditions we will be able to prevent the impending new danger, to get out of a vicious cycle and to move the state on safe and development-oriented rails. And this is quite possible without the populists in power, who are leading the country to final destruction,” the RPA leader said.