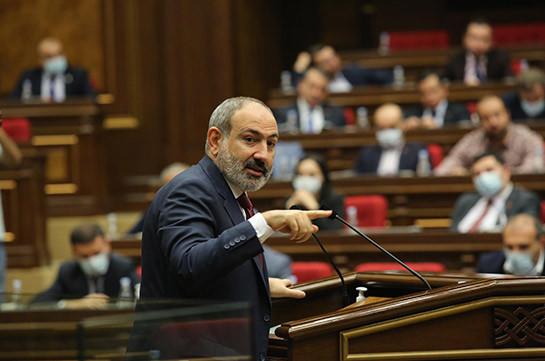 Armenia’s Acting Prime Minister Nikol Pashinyan speaking at the NA today stressed that the interview of the third president Serzh Sargsyan was a good occasion and opportunity to open new layers of the content of the negotiations.

“Years will pass and some documents will be unveiled and everyone will learn that in time Serzh Sargsyan wrote a letter to co-chairs expressing concern on how many Azerbaijanis would be considered residents of Nagorno Karabakh to participate in the supposed referendum. From this fact we learn that NK resident Azerbaijanis were to participate in the potential referendum,” the Acting PM said, raising question where the Azerbaijani residents of Nagorno Karabakh were supposed to live.

As to the idea that the third president knew that if negotiator changes the logic of negotiations will change as well, Pashinyan said the content of negotiations diverted back in fall 2015, in winter 2016.

“If Serzh Sargsyan has decided to make revelations, let him be so kind and tell the people what happened in fall 2015 and in winter 2016,” Pashinyan said, adding that they have documents proving that the change of the content of negotiations occurred during that time.

The National Assembly convened a special session today to discuss the issue of elections of PM.