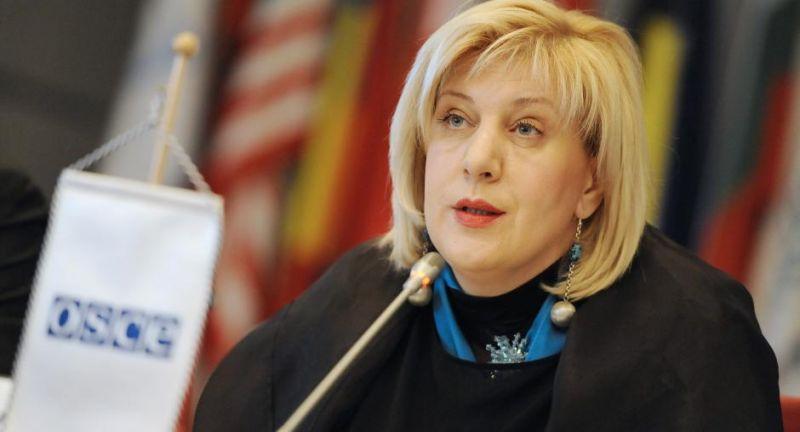 On April 20, the Council of Europe Commissioner for Human Rights Dunya Miyatovich sent a letter to Azerbaijani President Ilham Aliyev, concerning the Armenian-Azerbaijani conflict and its consequences.

In particular, Mijatovic writes, “Overcoming the past should be a priority to ensure the path to reconciliation and lasting peace”. “It is extremely important to ensure constant, free and unhindered access of international humanitarian and human rights organizations to the places where the affected population lives, not only for assistance and recovery, but also for the protection of human rights, victims of the conflict and their families”. She further expresses regret at the opening of the "Trophy Park" in Baku. According to her, wax mannequins of "dead and dying Armenian soldiers" are depicted there.

“I find such images very disturbing and demeaning. Such a manifestation can only further exacerbate long-standing animosities and foster manifestations of intolerance and limit the chances of genuine reconciliation between communities,” writes Mijatovic.

"I urge you to use your authority and take a firm stand against any rhetoric or actions that lead to incitement to hostility or hatred, and provide full political support for efforts to promote peace and reconciliation between Azerbaijan and Armenia," the message said. In conclusion, Mijatovic expresses her readiness to come to Azerbaijan, if she is guaranteed the right to visit all places "related to human rights."

The Azerbaijani Foreign Ministry responded to this appeal on April 27, expressing regret that the Commissioner of the Council of Europe did not react in any way to the rocket attacks by Armenians on peaceful cities of Azerbaijan and the deaths of dozens of people during the war.

The Council of Europe also does not react to Armenia's refusal to submit maps of minefields, which is why dozens of citizens are killed and injured in the liberated territories, and hundreds of thousands of refugees cannot return. Reconciliation requires appropriate treatment of past crimes and their victims, including accountability and redress.

An attempt to portray the conflict between Armenia and Azerbaijan as "interethnic enmity" or "ethnic communities living in Nagorno-Karabakh is absolutely wrong." The conflict was unleashed by Armenia, which made territorial claims against Azerbaijan, which was accompanied by acts of genocide, ethnic cleansing and other serious war crimes, the response says.

The commissioner's "regret" about the opening of the War Trophy Park in Baku is also groundless. “The Trophy Park symbolizes the triumph of international law and justice. Victory in the war for freedom, sovereignty and territorial integrity. The park, like its counterparts in other parts of the world, will serve as a powerful reminder that racism, discrimination and intolerance have no chance of success. It is a place to educate present and future generations about the dangers of the politics of aggression and intolerance.

"Inhuman scenes" or "alarming and degrading images" must be sought elsewhere in Europe, where they demonstrate evidence of horrific crimes against colonized peoples, the response notes.

Military equipment of Armenia captured on the territory of Azerbaijan is demonstrated in the park. The trophies in the park have been used for the occupation of Azerbaijan for years. This is a reminder of the victims of the Armenian aggression, including the Armenian military personnel, who for years were forced to fulfill the aggressive goals of the Armenian governments, and themselves were subjected to inhuman treatment by their superiors.

The Foreign Ministry recommends Miyatovich to send his appeal to the authorities of Armenia, where for many years a racist ideology based on hatred of Azerbaijanis and Turks has been practiced. It recalls the call of the Armenian MP, member of the Parliamentary Assembly of the Council of Europe Naira Zohrabyan to launch a missile strike on the city of Mingachevir.

Five months after the end of the war, alarming levels of hatred and Azerbaijanophobia are still observed in Armenian society. Anyone who dares to talk about reconciliation and peaceful coexistence with Azerbaijan is regarded as a "traitor" and is called "Azeri" and "Turk".

Azerbaijan has been home to various ethnic and religious groups for centuries. Azerbaijan at the highest political level has repeatedly declared its determination to reintegrate its citizens of Armenian origin with all the rights of the Constitution.

The conflict is over and Azerbaijan stands for the normalization of relations with Armenia based on mutual recognition of sovereignty, territorial integrity and inviolability of internationally recognized borders. Azerbaijan looks to the future and extends its hand to Armenia to establish normal interstate relations, the response says.

In conclusion, the Azerbaijani Foreign Ministry should emphasize that the letter dated April 20, 2021 casts doubt on the independence and impartiality of Mijatovic's work, which may negatively affect the relationship between the Commissioner and Azerbaijan.

The letter is far from impartial and clearly contradicts the declared noble goal of "promoting peace and reconciliation." On the contrary, it is inspiring revanchist circles, endangering the fragile process of establishing good-neighborly relations in the region.

"Azerbaijan urges the Commissioner to remain impartial in accordance with his mandate and refrain from actions and statements that negatively affect the reputation of the Council of Europe," the Azerbaijani Foreign Ministry said.