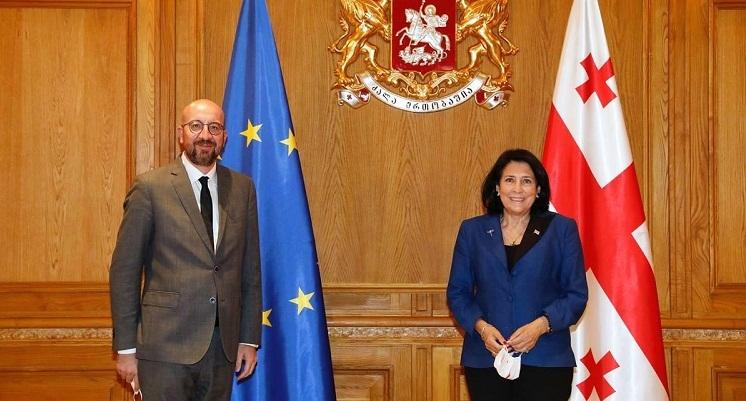 European Council President Charles Michel has come to Tbilisi earlier today, shortly after the majority of Georgian political parties signed his proposal to solve the political tension in Georgia which began following the 2020 parliamentary elections.

After a meeting with Georgian President Salome Zurabishvili, Michel said that he is happy Georgian political parties have come to an agreement and stated that ‘today marks the start of hard work that will take Georgia forward along its Euro-Atlantic path.’

He expressed hope that the Georgian state legislature will make laws with the involvement of all political parties present and that the country will carry out major electoral and judicial reforms.

She stated that the Georgian people have felt relief because ‘they have been made tired of the permanent tension and polarisation’.

It is the day of victory for the Georgian people,” Zurabishvili said.

The proposal by Michel released on April 18 covers electoral and justice reforms, offers a pardon for all violations and convictions stemming from the 19-21 June 2019 protests and the conduct of repeat parliamentary elections in 2022 if the ruling party fails to receive at least 43 per cent of votes in this year’s municipal elections.

The UNM, which received 34 of the 60 opposition mandates in the 150-member parliament, the European Georgia party and Labour party have not signed the agreement so far.

However, Shalva Shavgulidze from European Georgia also has plans to sign the agreement.