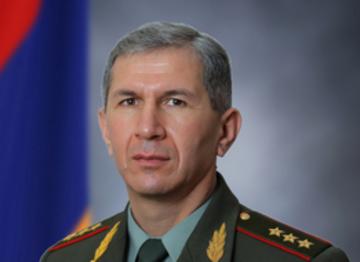 Former head of the General Staff of Armenia's Armed Forces Onik Gasparyan addressed an appeal to the citizens of the country in connection with his resignation.

He recalled that Prime Minister Nikol Pashinyan's statement on considering him dismissed - by force of law - from the post of Chief of the General Staff of the RA Armed Forces has been published on the official website of the Armenian Government.

"My position is unchanged. Both the published statement and the whole process of dismissal from the post are unconstitutional, which once again confirms that a pro-patriotic solution to the current crisis can be ensured only as a result of the resignation of the Prime Minister of the Republic and early parliamentary elections," Onik Gasparyan stressed.

He explained that he appealed to the Administrative Court of Armenia in order to ensure the supremacy of the Constitution and the law and to exercise force solely on the basis of law in Armenia.

"I will continue my service to the homeland and the Armenian people in another status," Gasparyan’s message reads in part.

He also addressed the generals, officers and soldiers, recalling that the key task of the army is to ensure the security of the homeland, so he urged them to continue to serve "exclusively to the homeland and people."