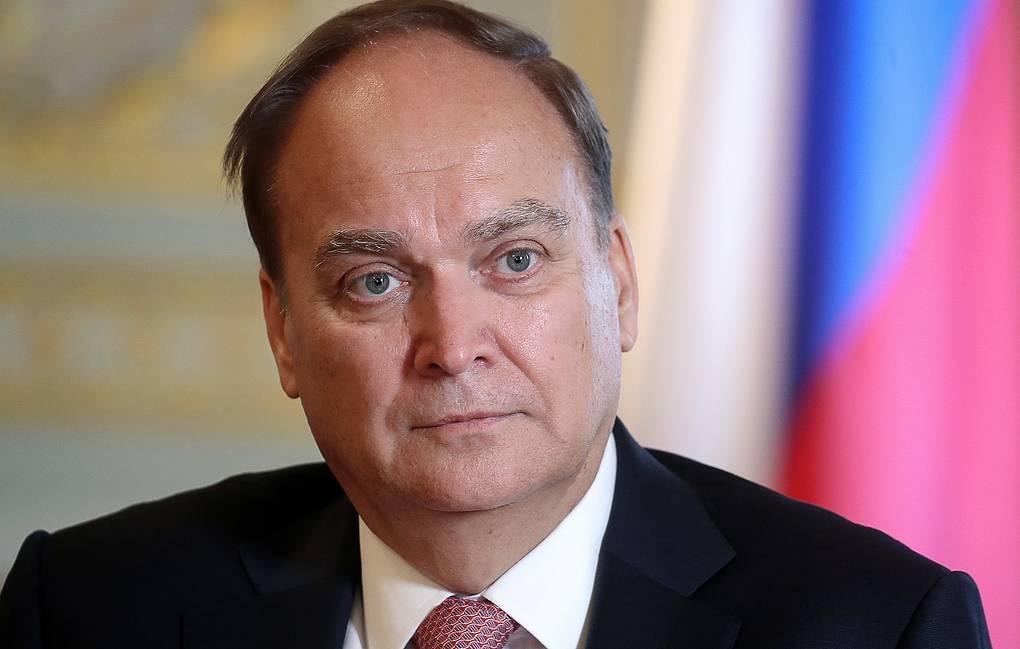 According to Russian Ambassador to the US Anatoly Antonov, Moscow and Washington "are now at a crossroads in Russian-American relations

Moscow positively views signals from Washington about its plans to revive the strategic stability dialogue, Russian Ambassador to the US Anatoly Antonov said Thursday speaking at the Cosmos Club, the envoy’s remarks are quoted at the Russian embassy’s Facebook page.

"We perceive positively the signals from the White House and the State Department on the plans to restore the dialogue on strategic stability and the possibility of further dialogue on arms control," he said.

"The Russian Side is ready for cooperation on the wide range of issues. The essence of our proposals is to elaborate a "security equation" which would take into account emerging military technologies and other factors affecting strategic stability. At the same time, it is important to preserve all the positive heritage accumulated between our countries over the last 50 years," Antonov added.

According to the ambassador, Moscow and Washington "are now at a crossroads in Russian-American relations." "Strategic stability, tranquility in the world, opportunities of the peoples of Russia and the U.S. to progressively develop the economy which determines the well-being of ordinary Russian and American citizens - all of that depends on the progress in our dialogue," he stressed.

Russia intends to present a more positive program of cooperation to the US to substitute the "two-track approach," Antonov said.

According to Antonov, since Joe Biden took office "the broad outline of the new administration’s policy towards Russia is emerging." "In essence, it is the old two-track approach," the diplomat pointed out. "It implies cooperation with us on the issues of American interest. At the same time the concept of deterring Russia will be used as much as possible."

The envoy underlined, "such approach is not the best option for the two permanent members of the UN Security Council that bear particular responsibility for international peace and security." "We will try to convince our colleagues to change their minds and will also propose a positive agenda of interaction," he added.

"As for the baseless and categorical allegations against Russia, we consistently propose to discuss any claims in a professional manner - on the basis of facts and analysis rather than on assumptions and emotions poured out to the public sphere," the Russian ambassador stressed. According to him, Russia "stands for maintaining pragmatic, equal and good-neighborly bilateral relations." "We do not want to remake the U.S. and bring ideological differences to the interstate ties. We expect the same approach to us from the new administration," the envoy noted.

He also emphasized, "It is time to stop dividing countries into the right and the flawed, the good democratic and the bad authoritarian." "The post-World War II world order based on the UN Charter was built by different states and stipulates the same rights for all countries, irrespective of their internal organization," Antonov recalled. According to the diplomat, the intention to substitute international law "some ‘rules-based order’ determined in the Western capitals" will lead to deterioration of conflicts and loss of manageability of the international system.

Russia believes that US accusations relating to human rights in the country are unacceptable, Antonov said.

"Particularly unacceptable are the rebukes in the human rights sphere. Nobody has the right to teach us how to live," the Russian diplomat said.

"Just look at the hysteria that has unfolded over the situation around [Russian blogger Alexey] Navalny. First, flat demands are made that we should plead guilty for the alleged "poisoning" of Mr. Navalny with a chemical weapon. At the same time, any counter arguments we put forward and requests for fact-based information we make are brushed off without any reasonable explanation. Then the U.S. authorities impose yet another set of sanctions against Russia, never bothering to present evidence," Antonov added.

"Let me remind you that this Russian citizen was convicted for committing an economic crime - by the Russian court on the territory of our country in accordance with the Russian legislation. We consider the absurd calls to free Mr. Navalny categorically unacceptable. In international practice, it is called interference in the internal affairs of a sovereign state," the ambassador emphasized.

Antonov also underlined that the US designated Russia as its enemy. "In order to counter the "Russian threat" the arms potential is being built up, military-political alliances are being strengthened. We are threatened with sanctions. We face methods of unfair competition," the envoy added.

Moscow expects deeper dialogue with the US on a number of regional topics, including Afghanistan, North Korea, Syria and the Joint Comprehensive Plan of Action (JCPOA) on the Iranian nuclear program, Antonov said.

"The Russian Side expects a deeper dialogue on the regional issues. These include Syria, Afghanistan, the situation on the Korean peninsula, the restoration of work under the JCPOA, the situation in the Middle East, Latin America, Asia and Africa," Antonov stressed.

"It would be in the interests of our countries to unite efforts in countering the coronavirus pandemic, terrorism, proliferation of weapons of mass destruction, climate change, as well as in joint space exploration, environmental protection in the Arctic," the Russian diplomat added.