Political crisis in Armenia: What next? 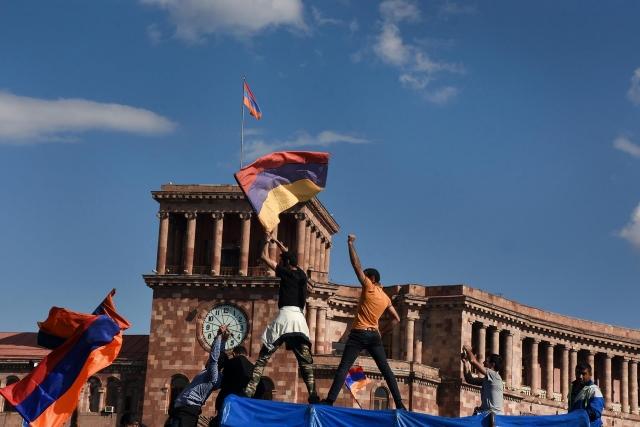 Armenia was plunged into a deep political crisis immediately after the defeat in the 2020 Karabakh war and the signature of capitulation by Prime Minister Pashinyan on November 10, 2020. The key feature of that crisis is a deep polarization of society. We may identify three main segments – those who demand the immediate resignation of Pashinyan regardless of who may replace him, people who believe Pashinyan should go but they categorically against return in any form of the forces or persons associated with the second and the third Presidents of Armenia Robert Kocharyan and Serzh Sargsyan, and those, who believe that Pashinyan should continue to govern. Another feature of the current crisis is an invisible struggle between the second and third presidents' supporters.

The new round of the crisis started on February 25, 2021, when almost the entire leadership of the General Staff of Armed forces demanded the resignation of Prime Minister Pashinyan. The trigger of that statement was Pashinyan's decision to fire the First Deputy Chief of General Staff allegedly for mocking Pashinyan's February 23 statement when he argued that the Russian Iskander missile used during the Karabakh war exploded only by 10 percent. However, top military brass had serious reasons not to be satisfied by Prime Minister.

In June 2020 newly appointed Chief of General Staff warned Prime Minister that everything should be done to avoid war in Nagorno Karabakh, but Pashinyan instead did the opposite by his actions and statements making the war inevitable. On the fourth day of the war Chief of the General staff told Pashinyan that Armenia had no chance to win the war and everything should be done to stop the war as soon as possible. However, despite that warning, Pashinyan rejected Russian President Putin’s offer to stop the war on October 19, 2020. Meanwhile, after Armenia's capitulation, the prime minister's supporters blamed the army and generals, saying that Pashinyan did not manage the battles and was not the main culprit of the catastrophe.

This was not the first case when Armenian military leadership made forays into domestic politics. Back in September 1996 Presidential elections, then Minister of Defense Vazgen Sargsyan publicly supported incumbent President Levon Ter Petrosyan, and army units entered Yerevan after opposition supporters had stormed the Parliament building. In February 1998 Army and Minister of defense were active in forcing the first President of Armenia, Levon Ter Petrosyan, to resign. Immediately after the assassination of Prime Minister Vazgen Sargsyan on October 27, 1999, army leadership gathered in the Ministry of Defense building and demanded from President Kocharyan to appoint as a new Prime Minister their candidate.

Meanwhile, despite Prime Minister’s statement about the ongoing military coup attempt, no soldiers and tanks were deployed in Yerevan, and generals did not join the opposition rallies. Nothing in the last seven days indicated that the Army is willing to organize a military coup or directly enter into politics.

It should be noted that Armenia still lives under martial law, which was declared on September 27, 2020. After November 10 capitulation, the opposition demanded many times to repeal the martial law, but the ruling "My step" faction have rejected all offers. According to the Armenian constitution, Parliament cannot organize a vote of no-confidence against the Prime Minister during martial law, and many believe that Pashinyan keeps martial law to prevent the opposition from initialing a no-confidence vote. Although the ruling "My step" faction has 83 MPs from overall 132, there is a possibility that in case of a no-confidence vote, some MPs from "My step" may vote against Pashinyan. Meanwhile, during martial law, Police troops and National Security Service forces are being deployed under the General Staff of Armed Forces' control, though they are under the prime minister's direct control now.

Some experts believe that Russia may stand behind the General staff's statement, thus seeking to topple Pashinyan through the military's help. It is not a secret that Kremlin had no trust towards Pashinyan before the war and has zero trust now. However, after the capitulation, Pashinyan readily implements all Russia's wishes and guarantees that Armenia will smoothly implement all written and oral agreements reached between Russia, Armenia, and Azerbaijan. Kremlin understands that Pashinyan may start new anti-Russia game with the US or other actors if it may save his power. However, apparently, Moscow conducted cost and benefits analyses and concluded that from a short-term perspective, Pashinyan’s rule in Armenia is the best option to push forward Russian interests in the South Caucasus. Thus, most probably, Russia has nothing to do with the recent actions of the Armenian Generals.