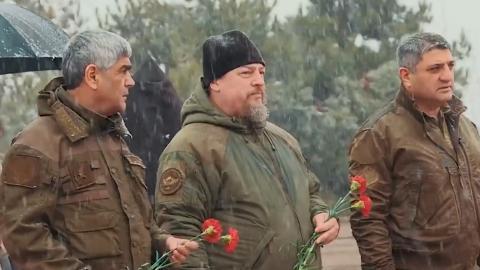 Official Baku has not yet expressed its attitude to the fact of the participation of several Russian peacekeepers in the anti-Azerbaijani political march of residents of the city of Khankendi on February 20, 2020.

The head of the press service of the Ministry of Foreign Affairs Leyla Abdullayeva asked Turan to send her the photos of the military priest, circulated in the FB, who walks along with the leaders of the Karabakh separatists - Arayik Harutyunyan and Vitaly Balasanyan on the occasion of the 33rd anniversary of the beginning of the movement for separating Karabakh from Azerbaijan - the so-called "miatsum" ". Turan sent photos to the Foreign Ministry and a request for an official opinion.

Azerbaijani society considers the active participation of representatives of the Russian military contingent in Karabakh in the February 20 rally as an indicator of the Kremlin's support for the separatist aspirations of the Armenians.

According to the available unofficial information, the dissatisfaction of official Baku was brought to the attention of the Russian leadership. The same sources report about the protest of the Azerbaijani side accepted for consideration by the command of the peacekeepers. In the next 2-3 days, this priest will be removed from Azerbaijan, the source said.

According to other sources, the spiritual status and name of this active participant in the anti-Azerbaijani action in Khankendi is Priest Boris, and he is a military priest.

After the march on February 20, he intended to visit the Albanian monastery of Khudaveng in Kalbajar, but was not allowed into the temple by the servicemen of the Azerbaijani army.

Russian political scientist, a former officer of the Russian army Oleg Kuznetsov, in discussions on the FB, spoke sharply negatively about the intellectual level of military priests in the Russian Federation, writing that this position is given to failed political instructors and they are "all narrow-minded, but with enthusiasm." Kuznetsov added that military priests in the Russian Federation are subordinate to their religious leadership, not military commanders.

Participant of the rally in Yerevan: "Karabakh belongs to Azerbaijan"

"There must be early elections!" - Georgian opposition representative