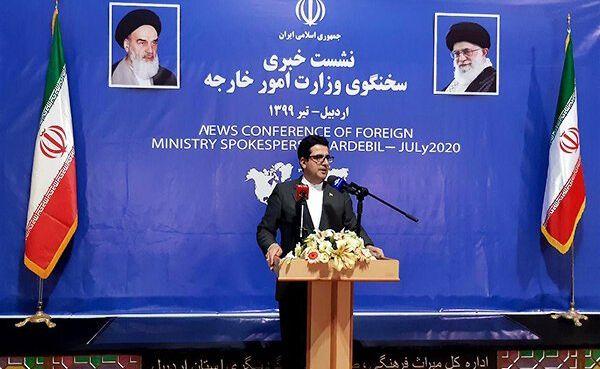 Deploring the conflict created between the two sides, he said that the region has no capacity for more conflicts and any warmongering will be detrimental for both sides.

"Iran believes that regional problems, especially dispute between Armenia and Azerbaijan, should be resolved through dialogue, and we are ready to adopt mediatory role in the conflict," Mousavi said.

Calling for further self-restraint by both sides, he added that the best way to ease tensions and peaceful settlement of the disputes is efforts to bring viewpoints closer to each other.

Commenting on draft of strategic document with China, he said that that plan was floated during Chinese president's trip to Iran in 2016 and last year foreign minister presented the draft to Chinese officials.

Noting that the document is a roadmap and is not enforceable, he said that if the document is approved by the officials of the two countries, various memoranda of understanding will be signed by them.

Noting that Iran-China relations are comprehensive and strategic, Mousavi said that Iran is also ready for signing long-term documents with the other countries.

Elsewhere in his remarks, he added that Iran has made necessary prediction in the case of extension of arms embargo.

Iran has issued necessary warnings to the Western states in this respect, he said, adding that Iran will give a resolute response to that.