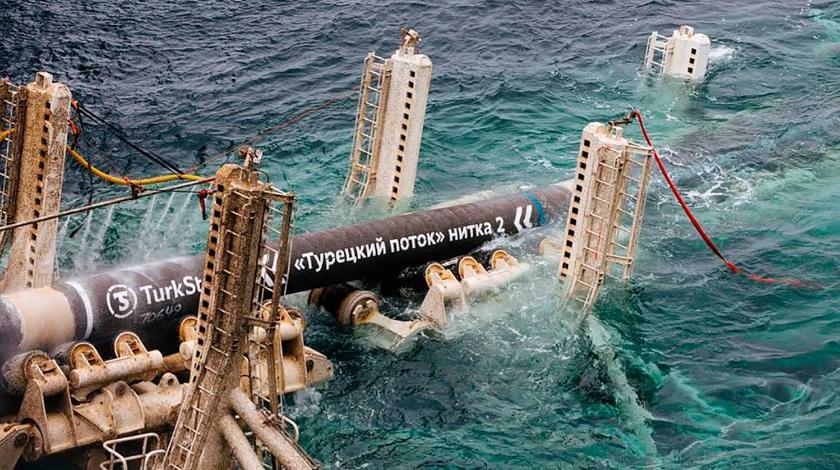 Our editor Dr. Plamen Petrov has written an article concerning current context of energy transportation geopolitics, published on the website of CACDS (Ukraine). With the permission of CACDS we are happy to deliver you the article.

In mid-May this year, the German energy regulator refused Nord Stream 2's request to exempt the Nord Stream 2 gas pipeline from the requirements of the so-called EU gas directive. Around the same time, the European Court of Justice dismissed a lawsuit filed by Nord Stream and Nord Stream 2, which sought to challenge the application of the EU's Third Energy Package to gas pipelines to the EU from third countries.

These two decisions mean that Gazprom will be able to use only half of Nord Stream 2's capacity for its gas, ie 27,5 billion meters per year. In addition, control of this pipeline must be delegated to an independent operator. At least at the moment, Nord Stream 2 cannot supply raw materials from another supplier, as only Gazprom in Russia has the right to export pipeline gas.

But before discussing options for its use, Nord Stream 2 must first be completed. At the end of 2019, Allseas stopped working on the pipeline to avoid US sanctions. Gazprom now hopes to complete the missing 130-kilometer section with the help of its Akademik Chersky pipeline, which has come a long way from the Pacific port of Nakhodka to Europe and has been in the Baltic Sea since this month. However, to complete Nord Stream 2, this ship must first be upgraded and replenished. Therefore, work on the completion of Nord Stream 2 is unlikely to begin before the fall of this year, and construction of the pipeline is unlikely to be completed by the end of this year. Its readiness for the second quarter of 2021 seems more realistic.

Although Nord Stream-2 is unlikely to be commissioned in the winter of 2020/2021, it should be noted that the existing Nord Stream-1 will operate at a full capacity of 55 billion m1 per year. This became possible after the German energy regulator allowed not to apply the main provisions of the EU gas directive to the Nord Stream-2 gas pipeline. The EUGAL pipeline, which was planned as a ground extension of Nord Stream 1, is now used to transport gas from Nord Stream 1. Thus, in practice, there are no problems for all 55 billion m³ of gas passing through Nord Stream-XNUMX per year to be delivered to European consumers.

The implementation of Gazprom's plans is also slowing down in the southern direction, which Russia is counting on to minimize gas transit through Ukraine. At the end of 2019, two branches of the Turkish Stream gas pipeline were completed. The first of them is intended for the supply of Russian gas to the Turkish market, and the second - through Bulgaria and Serbia - to Central Europe. From January 1, 2020, Bulgaria already receives gas not from the north, through Ukraine and Romania, but from the south - through the "Turkish Stream". In addition, from that date, Russian gas, which now also comes from Turkey, is supplied through Bulgarian territory to Greece and northern Macedonia.

Bulgaria, Greece and Northern Macedonia combined consume no more than 6 billion mU of Russian gas a year. This is a very small volume, given that each of the two branches of the Turkish Stream has an annual capacity of 15,75 billion m³.

But the most unpleasant for Gazprom are the trends in the gas market in Turkey, which imports more and more liquefied and less and less pipeline gas from Russia. The reason for this is purely economic - more than a year liquefied natural gas (LNG) is much cheaper than pipeline. Turkey has managed to build a very large LNG reception capacity and is now taking advantage of the favorable market situation. In the first four months of 2020, 44% of gas imported into Turkey was LNG. The share of Russian gas in the Turkish market has fallen twice compared to 2018 and now stands at about 20%. Thus, only 20% of the total capacity of the two Turkish Stream pipes is currently used. Let me remind you that there is another underwater gas pipeline between Russia and Turkey - the Blue Stream, which has a capacity of 16 billion m³ per year.

The slowdown in Nord Stream 2 and the sharp drop in exports to Turkey have prompted Gazprom to make an even greater effort to open the way for gas from Turkish Stream to Central Europe. The continuation of the "Turkish Stream" through Bulgaria (Bulgarian Prime Minister Boyko Borisov calls it the "Balkan Stream") is being built by the Saudi-Italian consortium "Arcade". According to the construction contract, the first phase of the project was to be completed by the end of May this year. This first stage includes the construction of a 305-kilometer pipeline that will connect Bulgaria's gas transmission network with Serbia and supply 3-4 billion m³ of gas per year from the Turkish Stream to the Serbian market. In the second stage, the length of the Balkan Stream should be 474 km. Two new compressor stations (Novaya Provadia and Rasovo) are also to be commissioned, which will increase the pipeline's capacity so that 12,7 billion meters of gas a year can cross the Bulgarian-Serbian border.

Construction of the Balkan Stream began in the fall of 2019, but so far it is behind schedule. Most of the workers are foreigners: 75 Italians, 52 Greeks and 239 people from outside the EU (presumably from Russia). According to unconfirmed information, a Russian company was hired as a subcontractor of the Arkad consortium. Due to the COVID-19 pandemic, all foreigners entering Bulgaria have been subject to a mandatory 14-day quarantine since the beginning of March, which has slowed down work on the Balkan Stream. In addition, two Italian workers died in accidents at work. Therefore, few doubt that the first stage of the project will not be completed on time. And the Bulgarian Ministry of Energy has already stated that relations with Serbia will be ready by the end of 2020. These new deadlines are also confirmed by the fact that the operator of the "Balkan Stream" - "Bulgartransgaz" accepts proposals to reserve the capacity of the pipeline on the Bulgarian-Serbian border for the period January-October 2021. It is difficult to predict whether the deadline for the full completion of the Balkan Stream, ie June 2021, will be met. It is more likely that there will be some delay here as well.

The Bulgarian government is doing everything possible to speed up the completion of the construction of the Balkan Stream: Prime Minister Borissov personally conducted 2-3 inspections of the construction site. However, they have only demonstrative and propagandistic value, because after the signing of the contract between the customer Bulgartransgaz and the contractor Arkad, everything is now in the hands of the latter, who performs construction work. Interestingly, so far nothing has been heard about possible claims for penalties for non-compliance with the terms prescribed in the contract. Apparently, the COVID-19 pandemic is considered a force majeure that justifies the delay.

Despite non-compliance with the agreed deadlines, the continuation of the "Turkish flow" through Bulgaria, as well as through Serbia, will be completed. Problems for Gazprom and Bulgartransgaz will appear later - when the transmission of gas through the already built gas pipeline will begin. 90% of the capacity at the Bulgarian-Turkish border and 80% at the Bulgarian-Serbian border is reserved for Russian gas coming from the Turkish Stream. This is unlikely to be approved by the European Commission, which is likely to insist on providing much greater access to the Balkan Stream to other companies trading in non-Russian gas.

Balkan Stream is practically being built on credit - Bulgartransgaz has paid Arkad an advance of BGN 250 million (about EUR 125 million), and the remaining amount will be paid in installments over 10 years. The situation is similar with the payment of two compressor stations, which are being built by the Ferostal Balkangaz consortium. If the Bulgarian sequel to Turkish Stream does not operate at full capacity, Bulgatransgaz will not have enough funds to pay for the work of the pipeline builders. The total value of Balkanski Potok, including VAT and interest on loans, exceeds BGN 3 billion (about 1,5 billion euros), and Bulgartransgaz's total capital is 2,45 billion levs (about 1,2 billion euros) . So these investments are risky and mostly politically motivated: Prime Minister Borissov wants "Bulgaria to remain on the gas map of Europe", ie. to continue the transit of Russian gas even after Gazprom ceases to use the Ukraine-Romania-Bulgaria route to supply Turkey.

The abundance of cheap LNG is about to change the gas map of Europe. Gazprom is forced to comply with spot prices in the gas market. Since the beginning of 2020, 57% of its export portfolio has already been indexed at the prices of European hubs. From March 2020, the prices of Russian gas for Bulgaria also depend primarily on the quotations of European trading platforms, and not on oil prices.

Through Nord Stream 2 and Turkish Stream, Russia has sought to bypass Ukraine and has recently attempted to maintain its almost monopoly position in the gas markets of some Eastern European countries. However, Gazprom has little chance of success, as it faces strong opposition from the European Commission and, in the case of Nord Stream 2, from the United States.